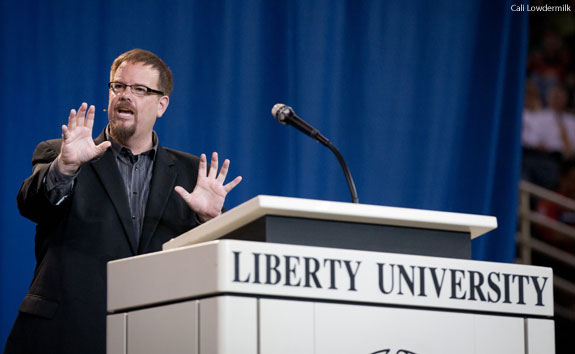 Ed Stetzer is a former executive of LifeWay, the Southern Baptist publishing and retail entity that is known for peddling soft and hard heresy for cash. Stetzer is peculiar, as he seems to be somewhere in the center of every controversy in Evangelicalism.

Most recently, we reported that Ed Stetzer is joining a host of false teachers and New Apostolic Reformation “apostles” and “prophets” at a worship festival and he’s also right in the middle of the woke church movement.

In a recent article published at Christianity Today, Stetzer makes a striking move that seems to validate the concerns of LGBTQ, namely, “feeling marginalized” and “discriminated against.” He writes,

Watching the Equality Town Hall on CNN yesterday was both instructive and disconcerting.

It was instructive because I really did want to see where we were as a nation—and how divided we might be on questions related to religious liberty, the LGBTQ+ community, and the need for us to all live together in one democracy.

First off, referring to sodomites as the “LGBTQ+ community” is feckless and irresponsible. Communities are not built around sin — they are built around values that bond a group together. Sexual immorality — in all of its forms — is not a value that builds and strengthens a group of people. It is a destructive sin that destroys society and brings the wrath and judgment of God upon people.

But I digress, he continues,

I was struck by the fact the debate was regularly interrupted by protestors. What we all need to acknowledge is that many people who identify as LGBTQ+ have felt marginalized and discriminated against, and have seen violence as a part of their reality.

I’d like Ed Stetzer to tell us what obligation we have under God to validate their feelings of being marginalized or discriminated against. There is no biblical warrant to stand around and listen to sodomites whine and cry about “equal rights.” It is not the job of the Church to stand up for the rights of LGBTQ people — it is the job of the Church to preach to them the life-giving gospel of Jesus Christ and call them to repentance and faith.

This follows in the footsteps of the current Southern Baptist Convention president, JD Greear, who preached a sermon earlier this year calling on Christians to stand up for LGBTQ rights. It’s nonsense and there is no precedent for or obligation to do such a thing.

That should leave us all with a deeper sense of compassion and concern. People spoke of their lives being at stake; as Christians, we should be the first ones to hear and honor their anthem of desiring safety and protection.

Hogwash! LGBTQ people’s lives are no more at stake than anyone else’s in this country. Even if they were, that’s not a reason to validate their feelings. Their “feelings” stem from their own sinful choices.