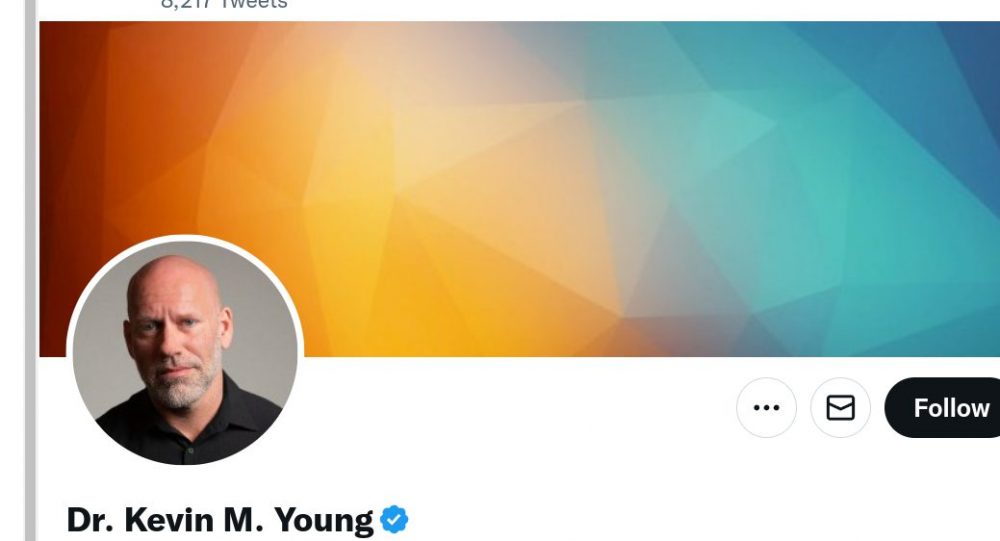 A New False Prophet is Gaining Popularity Among Us, His Name is Dr. Kevin M. Young

Not to be confused with Dr. Kevin DeYoung, Dr. Kevin M. Young, a Twitter personality, has exposed himself as an enemy of God and Christianity. For years, he has been using his education and position of influence to undermine the very foundations of Christianity and promote his own heretical beliefs.

Young attended Dallas Seminary where he received his Master’s in Christian Education and later earned his Doctor of Ministry from Portland Seminary, according to his biography. But instead of using his education to glorify God and to further the cause of Christianity, he has used it to attack the faith from within by cloaking his anti-Christian beliefs in Christian garb.

It is upon this foundation that he attempts to smuggle immoral sexual behaviors into the Church and absolve those who practice them of any wrongdoing, arguing against Scripture that homosexuality and other sexual perversions are not sinful. Recently, Young posted on Twitter that the reason God smote Sodom and Gomorrah had nothing to do with homosexuality and that the Church needs to “admit we were wrong” on this.

Of course, this is patently false and Jude 1:7 demonstrates this stating “… just as Sodom and Gomorrah and the surrounding cities, which likewise indulged in sexual immorality and pursued unnatural desire, serve as an example by undergoing a punishment of eternal fire.” Yet, Young continues to push queer theory in the Church an advance the idea that God is perfectly fine with unrepentant homosexuality. In fact, a cursory look at his Twitter account will demonstrate that sexual immorality is his driving theological bent and all of his other theology is derived from his belief that homosexuality is basically good.

Young has also argued that if your pastor doesn’t regularly go see a pagan psychotherapist, you should leave that church.

Kevin Young is also pro-abortion. While he states that he stands “as a staunch advocate for life at all ages and stages,” in an article he penned titled What Does the Bible Really Say About Abortion? in the next breath, he argues that he understands “that the issues many women face in the decision are far more complicated than I could ever fully comprehend.”

He then goes on to argue that “You shall not kill” and “You knit me together in my mother’s womb” are insufficient to determine the immorality of abortion and that “Biblically, the situation is complex.” He then concludes that “The Bible neither affirms a right to life for the unborn nor a woman’s right to choose” after attempting to demonstrate that abortion has always been morally acceptable throughout history including in the Jewish tradition.

Some may argue that Young’s views are simply unorthodox, but the truth is that they are downright heretical. By rejecting the basic tenets of Christianity, he is leading people away from the faith and down a dangerous path. It is clear that Young’s true motive is not to seek the truth but to destroy Christianity and promote his own heretical beliefs. He is a wolf in sheep’s clothing, using his position of influence to lead the faithful astray.

Join our ad-free Substack community to read and post comments...
- Advertisement -
Previous article
America is Now Run by Liberals, Looneys, Lackeys, and Losers—Looks More Like a Second-Rate Circus
Next article
Make No Room and Have Zero Tolerance for LGBTQ Ideology in the Church