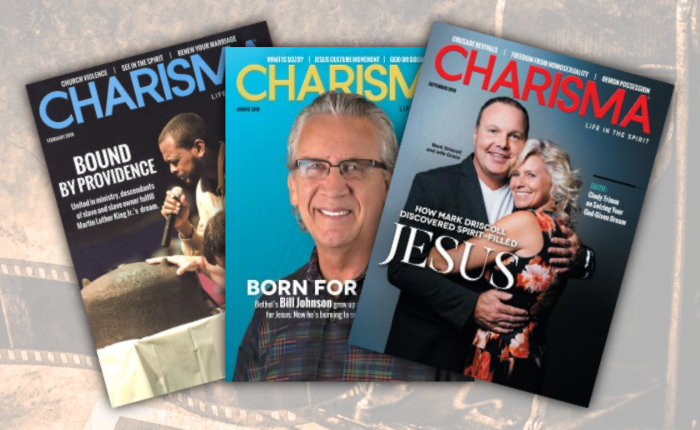 Charisma News is one of the strangest “Christian” publications out there. While there are dozens — hundreds — of leftist, progressive publications in the blogosphere that call themselves “Christian,” very few conservative-leaning Christian publications publish stuff as idiotic as what comes out of Charisma News at times.

Besides the charismatic movement just being plain blasphemous and ungodly, Charisma News and its sister publication, Charisma Mag regularly promote false prophets, false apostles, and advances not only unbiblical but illogical ideas that, for the most part, requires a brain suffering from severe psychosis to think up.

Most of that is, however, to be expected and par for the course for Charisma. But the following five articles are what, after careful deliberation, we deemed to be some of the most reprehensible articles a so-called Christian publication would have the audacity to publish in 2019.

Taking the #5 spot for Charisma’s dumbest articles in 2019 is an article titled Would ‘Prince of Preachers’ Charles Spurgeon Attend ‘The Send’? Basically, the article answers the question in the affirmative, asserting that Charles Spurgeon –the Calvinistic cessationist preacher and theologian — would be at home at a nonsensical charismatic conference promoting tongues, prophecies, and fake healings. Of course, we think not. Thankfully, our friends at Pulpit & Pen covered this story.

Hitting the #4 spot for Charisma’s dumbest is an article the publication published after John MacArthur’s strong and public rebuke of Beth Moore’s rebellion titled Why John MacArthur Should Apologize to Women Preachers. The article lays out what the title suggests calling on John MacArthur to apologize to Beth Moore and other women “preachers” for, well, standing on biblical truth. Of course, Charisma is notably wrong here and John MacArthur owed nobody an apology. The true church is grateful to have a bold defender of the faith speak such truth when it’s needed. Reformation Charlotte covered this here.

The #3 spot is reserved for one of my personal favorites, an article that Charisma wrote calling on witches not to rely on lunar events. The article, Wiccans Look to Tonight’s Black Supermoon for ‘Shift of Energy’, was hilarious because it was just so ironic. From a publication that regularly promotes lunar events — namely “blood moons” — they expect other religions not to do the same thing. You can read where Charisma promoted blood moons here, here, and here. Reformation Charlotte covered this story at this link.

It was hard to decide between the #1 and # 2 spots for the remaining two. Because they were both so outrageous that they topped the scales. However, after giving it some thought, we thought that the article Why Women Should Go and Boldly Preach the Gospel should take the #2 spot. Why? We already know that Charisma supports women preachers — all of them being false teachers — but this article, in particular, claimed that Paul’s words in his epistles about women remaining quiet were evil. Let that sink in for a moment. They claim to believe in the inspired, infallible text but say that those words are evil. Some might just call it careless. We call it dumb. Reformation Charlotte covered that story here.

And last but not least, taking the top spot for the #1 dumbest article published at Charisma in 2019 is an article they titled Openly Gay Charismatic Worship Leader Performs Lauren Daigle Song on ‘American Idol’ that has since been removed from their website after Reformation Charlotte reported on it. The original link was here. The archived version can still be seen here. While Charisma is wrought with problems — from outright blasphemy to theological aberrancy — they’ve always been somewhat conservative when it comes to social issues. Which is why it was surprising that the outlet would publish this article which praised an openly gay worship singer and called him “spirit-filled.”

While this list is far from exhaustive — and these are probably not the dumbest articles the publication has published all year — they are the ones that struck Reformation Charlotte at points throughout the year. When we covered these articles, many of our followers noted the irony that spilled from the publication’s pages. It is safe to say that Charisma News (and Charisma Mag) are not safe publications for Christians to indulge in without your discernment goggles on.