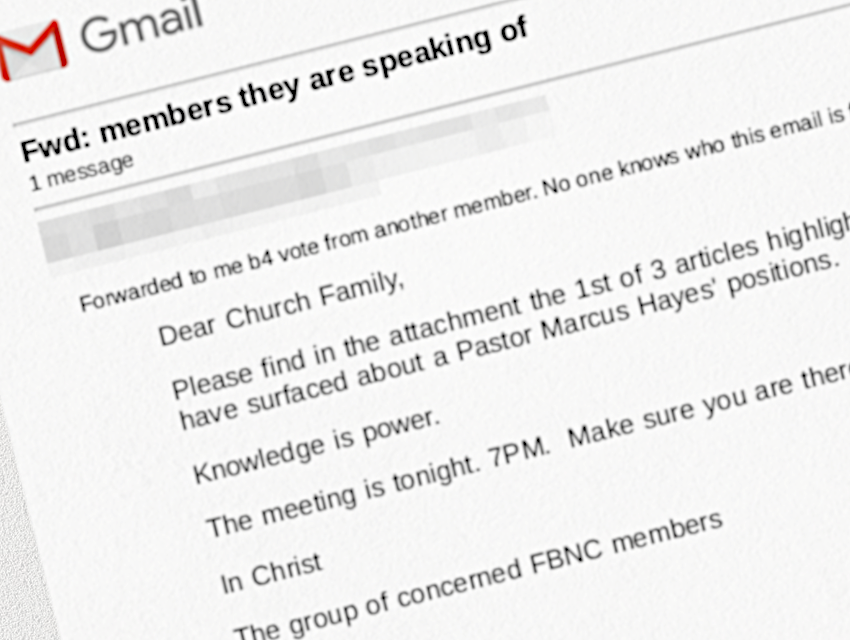 Reformation Charlotte has been covering the story Marcus Hayes’ rejection as lead pastor of First Baptist Church in Naples, FL where he received only 81% of the required 85% vote to secure the position. In light of his rejection, several prominent and outspoken Southern Baptist leaders have accused that 19% of members who voted against Hayes of “racism” and “white supremacy.” In our first article, we predicted that these accusations were patently false, and our second post, we received corroborating evidence that the search committee had a history of corruption and possibly acted the same way this time.

A copy of the entire email will be posted below, however, I will summarize and highlight the concerns first.

First, the members who voted “no” had a major concern with Hayes being used primarily as a token. In the email sent to members by the concerned party, the question of Hayes qualifications was brought up. The email states,

After talking with a member of the search committee we learned that the committee asked Marcus if he had a plan to bring about church reconciliation?  Their response was “Well, Pastor Marcus Hayes is in a bi-racial marriage so he is very acquainted with problem resolution”.  We were not sure how to take this answer but found it filled with racial overtones that had nothing to do with the nature of the conversation.

It’s clear that the leadership of this church were more concerned about having a black man as pastor to signal some kind of virtue to the church and to the rest of the Southern Baptist Convention that they were somehow virtuous for having a black pastor, despite his qualifications, which they also mention.

In the email, it was said that Marcus Hayes began to block members of FBC Naples on social media PRIOR to the vote. He began to block them because they were raising questions about legitimate concerns. We’ll talk about those concerns next. But we must ask: what kind of pastor blocks members of his local congregation?

Turns out, Marcus Hayes is a pro-abortion pro-LGBTQ Democrat supporter, and a sizable number of the church’s membership was concerned about that, among other concerning things. According to FBC Naples leadership and the Southern Baptist Convention leadership, it’s “racist” to be concerned about that. Here’s what the email listed as concerns that should be asked of Marcus Hayes BEFORE the vote,

This email encouraged others to ask these questions at the pre-vote meeting. Just like Reformation Charlotte predicted, there is not a single thing in this email that points to racism or white supremacy as the reason for voting against him. In fact, he should have been rejected by 100% of the voting bloc and because he wasn’t, it’s actually clear that the 81% who voted “yes” to Hayes are actually the racists for judging Hayes by the color of his skin rather than by the content of his character — which happens to be ungodly.

Join our ad-free Substack community to read and post comments...
- Advertisement -
Previous article
Leader at FBC Naples Who Are Charging the Members With “Racism” Had Corruption Charges Against Him
Next article
Hymn Society Releases “Queer Hymnal” For LGBTQP+ Anglicans