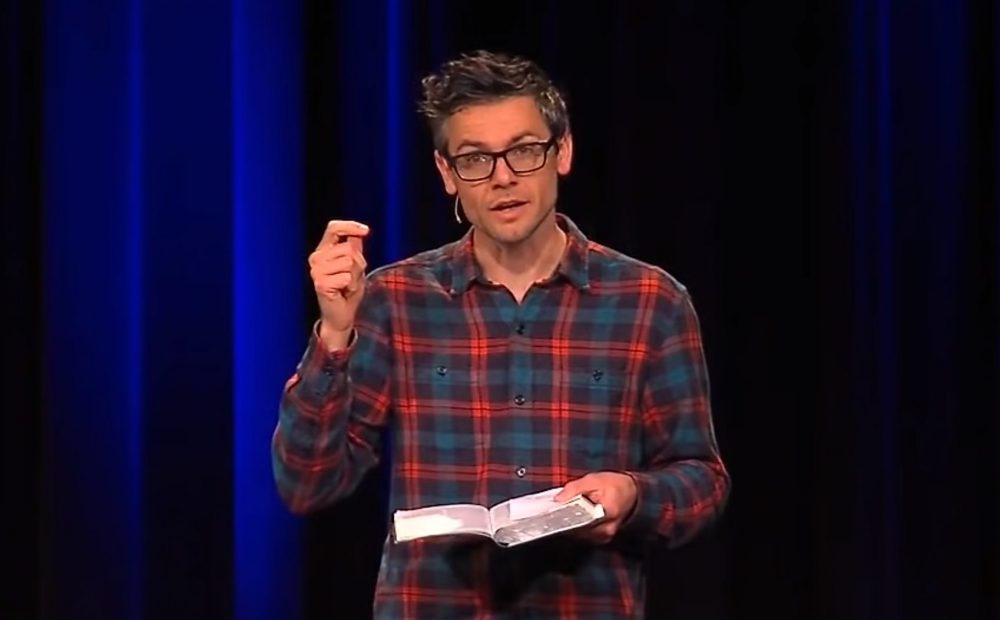 False Teacher of the Day #54: Tim Mackie, The Bible Project

It is pertinent that we continue to warn Christians about the dangerous teachings of Tim Mackie, co-founder of the widely popular The Bible Project series on YouTube. In our previous article, we exposed Mackie’s denial of the biblical doctrine of Hell as a place of torment where the eternal wrath of God is poured out among those who reject Him. Rather, Mackie portrays Hell as a creation of man, a view that is clearly contradictory to the clear teaching of Scripture. It is imperative that believers stand firm on the truth of God’s Word and reject any teachings, like those of Mackie, that undermine it.

Tim Mackie recently participated in a conversation with the hosts of the Almost Heretical podcast to discuss his views on homosexuality, inerrancy, and other related topics.

Unfortunately, rather than taking a stance against homosexuality and transgenderism based on a biblical perspective, Mackie urges others to consider the Bible’s claims about sexual morality in the context of contemporary scientific knowledge about biology and gender. “Because what usually happens is,” Mackie said, “the Bible is a divine rulebook dropped from heaven, here’s a verse taken out of context, and then whether intentionally or not, I end up using it as a weapon to reaffirm some kind of cultural or socioeconomic boundary line between me and them.”

“That’s usually how the Bible plays in these conversations, and I think Jesus would be really disappointed in His followers about that. So for me, it’s about how does the narrative work, what are the claims of the narrative, and how does that engage the best of what we know about gender and biology today?”

Rather than firmly supporting the authority of the Bible, Mackie attempted to address the issue of inerrancy but argued that the term “inerrancy” is not useful for understanding it. This not only reveals a lack of trust in the ability of a Holy and Righteous, omnipotent, and sovereign God to clearly and accurately communicate with His people, but it also outright rejects the historic doctrine of verbal plenary inspiration. He explained that the concept of inerrancy, which refers to the belief that the Bible is completely free from error, is a modern construct that is not representative of how the biblical authors themselves viewed the scriptures. Instead, he suggests that the Bible does contain errors.

“Inerrancy is a more modern word connected to that thing we talked about earlier about the painting of the pipe,” Mackie said. “Does the painting refer to the real thing in a way in which there is no errors in that reference process? And I’d join the ranks of those who find the word inerrancy to be setting up the conversation in not just an unhelpful way, but just a really odd way.”

Instead, Mackie prefers to use the “biblical vocabulary of faithfulness,” which he believes better captures the idea that the Bible faithfully represents God’s will to His people. The doctrine of inerrancy is at the heart of theological conservatism, and abandoning it opens the door to heresy, including a lax approach to sexual immorality and other sins. It is vital to uphold the doctrine of inerrancy in order to defend against such deviations from the truth. Mackie’s position is classic theological liberalism.

However, Mackie’s views on the atonement are even more problematic. In one sermon, he made at least two outlandish statements ridiculing the conservative, biblical doctrine the atonement and penal substitution. In the video posted at the end of this article, you can hear Mackie’s remarks at the following timestamps:

Tim Mackie states (4:01 in the video), “And then we bring Jesus into it. And what we end up with is a story that God’s perfect, he’s holy and he’s perfect. You’re not, so God has to kill you. He’s to kill you. He needs his pound of flesh.”

Then, Mackie states (4:42 in the video), “…in the name of His justice and so he, he’s gonna kill you because he’s angry at you. But instead, he’s gonna kill Jesus. And he takes out his anger on Jesus and then he allows you, after you die, to go to the good place and not the bad place. So you can sing forever the praises of the God who didn’t kill you.”

Tim Mackie’s comments about the atonement conflict with the biblical doctrine of penal substitution and imputation because they present a distorted and incomplete understanding of the purpose and significance of Jesus’s sacrifice on the cross. According to Romans 5:8, “God shows his love for us in that while we were still sinners, Christ died for us.” The atonement is not about God requiring someone’s death in order to satisfy his sense of justice or to vent his anger. Rather, it is about God offering a way for people to be reconciled to him and receive forgiveness for their sins through the death and resurrection of Jesus.

This belief is rooted in the understanding that Jesus, as the Son of God, is fully divine and fully human, and that his death on the cross was a voluntary and substitutionary sacrifice that fulfilled the requirements of God’s justice and demonstrated his love and grace towards humanity. According to Colossians 1:20, “and through him to reconcile to himself all things, whether on earth or in heaven, making peace by the blood of his cross.” Mackie’s portrayal of the atonement as a transaction in which God takes out his anger on Jesus and then allows people to go to a good place after they die is a mockery of Jesus’s sacrifice on the cross and does not accurately reflect the biblical doctrine of the atonement.

Overall, Tim Mackie has consistently demonstrated a lack of understanding and respect for the Bible and its teachings, particularly in regards to the doctrine of the atonement. He has distorted and minimized the significance of Jesus’s sacrifice on the cross, which is one of the most central and fundamental teachings of Christianity.

In light of this, it is necessary for believers to take the warning of 2 Timothy 3:16 seriously: “All Scripture is breathed out by God and profitable for teaching, for reproof, for correction, and for training in righteousness.” Those who disregard or misinterpret the Bible, such as Mackie, should be marked and avoided in order to protect the integrity and authority of God’s Word.

17 I appeal to you, brothers, to watch out for those who cause divisions and create obstacles contrary to the doctrine that you have been taught; avoid them. 18 For such persons do not serve our Lord Christ, but their own appetites, and by smooth talk and flattery they deceive the hearts of the naive. —Romans 16:17

Join our ad-free Substack community to read and post comments...
- Advertisement -
Previous article
Tim Mackie of the Bible Project Denies Literal Hell, Says It’s Something That Humans Created
Next article
Rick Warren Brags About Massive Library Larger Than Your House, Yet He Still Has Terrible Theology