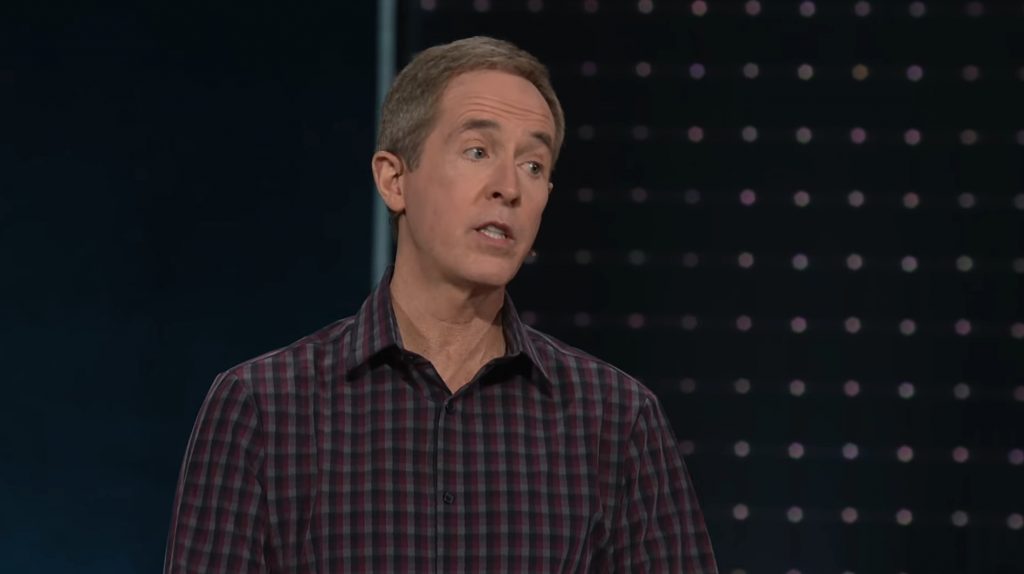 In today’s installment of Reformation Charlotte’s False Teacher of the Day series, Andy Stanley, son of former Southern Baptist President, Charles Stanley, and pastor of Northpoint megachurch in Atlanta, GA, takes the spotlight as one of the most prolific and unfruitful false teachers thus far. Stanley is one of the most nocuous false teachers because of his ability to fit within mainstream Evangelicalism. Make no mistake about it, though; Andy Stanly is a ravenous wolf in sheep’s clothing.

One of Andy Stanley’s most grievous heresies is his teaching on the authority–or lack of authority–of the Scriptures. Stanley separates the Word of God from God himself and teaches that the Scriptures are not the foundation of our faith nor should we look to the Scriptures as the final authority. Instead, he teaches, we should look to Jesus.

During a sermon at Dallas Theological Seminary, Stanley argued that we should not feel inclined to defend the Scriptures, rather we should defend “the gospel.” He says (video linked here):

If people want to argue with you about their faith, don’t tell them about the Bible. Let’s start with Matthew, Mark, Luke, and John and we’ll talk about the epistles. The only literature, the only documents we should ever feel pressure to defend is not the Bible, it’s better than that. It’s simply, the gospel.

If you notice, the last word “gospel” above is singular. Andy Stanley is intentionally separating the gospel from God’s infallible Word where His revelation is recorded for us. Stanley doesn’t actually believe that the Scriptures are God’s infallible words, which makes him — just like Roman Catholics — traditionalists. The error is that it is impossible to know Jesus without looking to the Scriptures.

Stanley also teaches that the Ten Commandments don’t apply to Christians. “We need to stop mixing the old with the new,” Andy Stanley said in an op-ed at Relevant Magazine, “the church has a terrible habit of selectively rebranding aspects of the old covenant and smuggling them into the new.”

Doubling down on his assertion, Stanley declared that we need to quit erecting Ten Commandments displays and should instead consider making monuments dedicated to the Sermon on the Mount.

Stanley’s hostility to the Scriptures is nothing new. He’s asserted that the Scriptures are indefensible and that expository preaching is “easy” and “cheating,” even going as far as saying that it doesn’t matter if the Scriptures are true regarding the virgin birth of Christ. He also preached a sermon declaring that we don’t believe in the resurrection because of the Scriptures.

Essentially, this is the heresy known as Marcionism.

But his heresies don’t end with his hostility toward the Scriptures. Andy Stanley has also embraced a pro-homosexual, pro-feminist worldview including in his church. Andy Stanley once told the mother of an openly-gay and practicing lesbian that her daughter was saved.

And Andy Stanley also teaches that God loves us more than he loves himself and says that God didn’t create us so that we could keep his commandments.

Of course, this is in direct conflict with what the Scriptures–that he denounces as non-authoritative–actually say about why God has created us. God does not love us more than He loves His commandments because His commandments are His Word and His Word is His Son, Jesus. Further, God cannot be separated from His law because His law is a reflection of His nature.

For we are his workmanship, created in Christ Jesus for good works, which God prepared beforehand, that we should walk in them. –Ephesians 2:10

Andy Stanley is extremely dangerous because of his notoriety and influence among mainstream Evangelicalism. While his actual teachings are on par with rank heretics such as Rob Bell and Brian McLaren, his reach is much greater and tolerance within the Church is much higher. He has been platformed by the Southern Baptist Convention, by Dallas Theological Seminary, and many other mainstream outlets. However, he should be written off completely, marked, and avoided by any who actually love God and believe His Word.