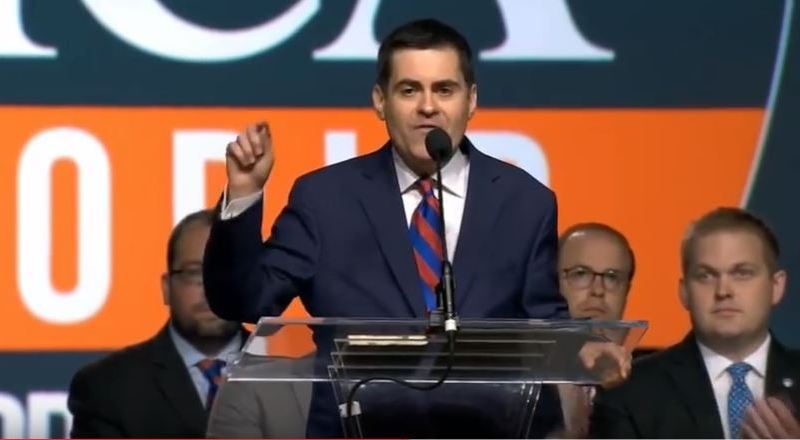 In case you missed the news, far-left political and theological activist, Russell Moore–who headed the public policy arm of the Southern Baptist Convention, the Ethics and Religious Liberty Commission (ERLC)–announced his departure from the institution yesterday to join the apostate ranks of Billy Graham’s magazine, Christianity Today.

Moore was undeniably the most controversial figure in the Southern Baptist Convention. In fact, it could be said he was the most controversial figure in all of mainstream Evangelicalism. Moore’s leftist activism landed him in hot water on multiple occasions with conservatives including once drawing the ire of then-presidential candidate, Donald Trump, in 2015. After relentless months of anti-Trump tweets and labeling Trump an “arrogant huckster” who is unfit for office, Trump finally responded to him by calling him a “nasty guy” with “no heart” who doesn’t represent Evangelicals.

Trump, as un-Christian as he is, couldn’t have been more correct. Here’s a short list of some of Moore’s accomplishments since he took office in 2014.

To say that the Southern Baptist Convention’s riddance of Russell Moore is “good” would be an understatement. It’s fantastic and brings tears of joy to many of us who have been on the front lines for years at the expense of our own reputations, livelihoods, and fellowship with other believers warning against this man’s influence. For 8 years, it’s been like lying our sides eating barley cakes baked on the flames of human excrement–but finally, God’s elect has listened and for the last two years, they’ve joined the fight and pressure has mounted for Moore’s removal.

Sadly, though, it’s not going to be enough.

In 2007, my father died of esophageal cancer. The tumor in his esophagus was so large he couldn’t swallow. After about 3 months of radiation and chemotherapy, the tumor was eradicated–my father could eat once again. Sadly, however, the tumor had already spread. It was in his lymph nodes, his back, his hips–it was all throughout his body. Eradicating the main tumor could not save his life. The doctors discovered the cancer too late and there was nothing they could do. It crept into his body unaware.

That’s the best analogy I can come up with for what Russell Moore has done to the Southern Baptist Convention.

For certain people have crept in unnoticed who long ago were designated for this condemnation, ungodly people, who pervert the grace of our God into sensuality and deny our only Master and Lord, Jesus Christ. –Jude 1:4

Russell Moore’s tentacles of woke influence in the Southern Baptist Convention have reached far and wide. Every institution, every seminary, nearly every church, has been influenced by the movement Moore started, a sleeping giant that Moore awakened, a beast that now lives in pastors, professors, and leadership. So much damage has been done that it will be an uphill battle, if not impossible, to undo all of it.

Moore may be gone, but he still lives in people like JD Greear, Jarvis Williams, Matthew Hall, Danny Akin, countless ladder-climbers like Brent Hobbs, Spence Spencer, and Josh Wester, and other pastors and leaders who’ve blindly supported his movement, Company Man™ Dave Miller and SBC Voices. And, of course, we can’t forget who placed Moore in office, to begin with: Al Mohler, who never spoke one word against Russell Moore the entire time he was in office pushing this agenda.

So, sure, while it’s nice to have the main tumor eradicated, if Southern Baptists hope to save the denomination and its institutions, they better hope the chemotherapy works.