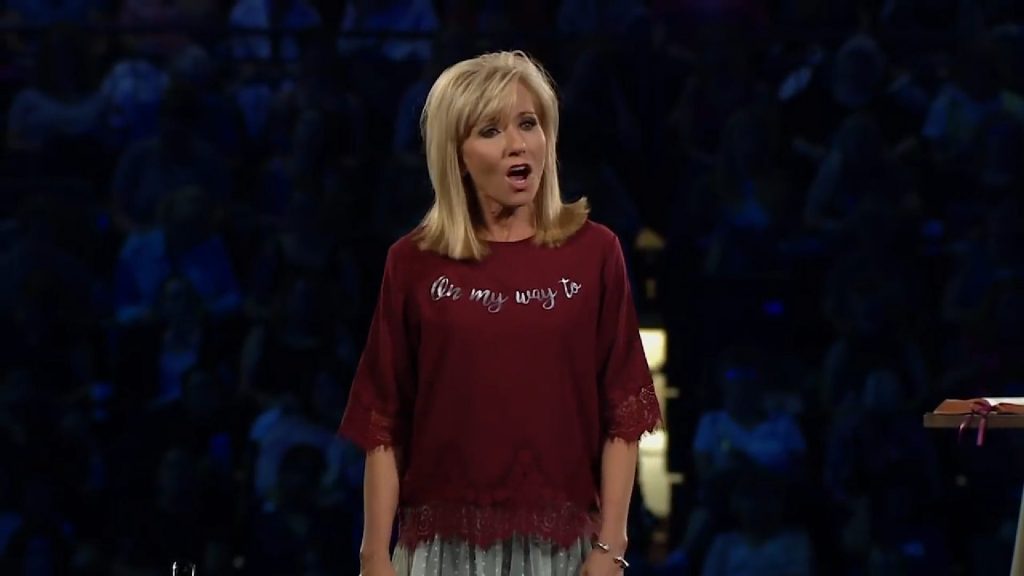 Beth Moore’s car has long derailed the tracks of orthodox Christianity as she has spent the vast majority of her adult life rebelling against God. She has departed sound Christian doctrine and embraced a wholly anti-Christian theological system that is devoid of the actual substance of the gospel as she replaces it with social justice mixed with a seeker-sensitive bizarre charismatic dream-state religion that can only exist in her own head.

Whether it be her fanciful tales about meeting a stranger at a bus stop to give her money because “God told her to,” or outlandish dreams of God lifting her up in the air to envision Catholics and Protestants in ecumenical unity or her recent elbow-locking with heretics Joel Osteen, Matt Crouch, and Brian Houston, her hand holding with wolftress, Joyce Meyer, her quick jump to condemn an innocent high school kid in a racist media propaganda attack, or her declaration that spending time with God is not the same thing as spending time in the Bible, one thing is for sure, Beth Moore isn’t too concerned with obedience to the Great Commission or, as seen below, with being a Christian at all.

Beth Moore recently liked a tweet that calls on Christians to, well, not be Christians. Not to pray. Not to share the gospel. And not to even love people amid the pro-gay anti-government riots taking place around the country today in the wake of George Floyd’s death at the hands of a Minneapolis police officer.

Of course, this only confirms what we already knew about Beth Moore — that she isn’t actually about the gospel. To think that you can join hands with pro-violence hate groups like Black Lives Matter and ANTIFA and fight “systemic racism and racial violence” without the gospel is absurd and exposes her agenda.

Much like Southern Baptist President JD Greear — whose church is organizing a protest march alongside pro-gay militant anti-government hate groups like Black Lives Matter in NC — Beth Moore has been given over to the cultural whims of leftist politics. These same people, however, never throw the same kind of hissy fit over actual systemic and racial injustices like abortion. What’s sad, though, is that there are still faithful Southern Baptist leaders who have not removed their churches from the apostate denomination yet. We should hold out hope that this movement will be the final straw.