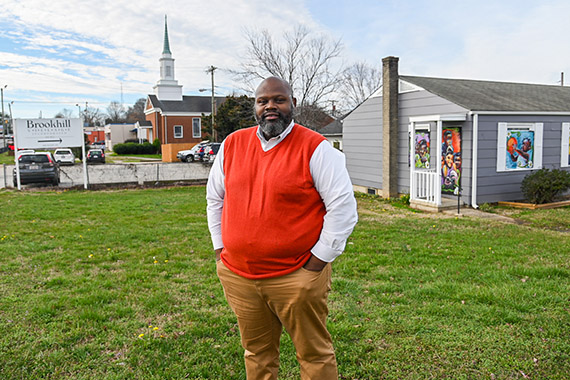 We are undoubtedly witnessing the greatest apostasy in the history of the New Testament Church. More than ever, churches and those who claim to be pastors and shepherds have embraced a postmodern worldview that seeks to validate the subjective feelings and cultural whims of the world around them. From social justice to sexual immorality–it is clear that much of the visible church has abandoned the gospel in exchange for cultural relevance.

…because they exchanged the truth about God for a lie and worshiped and served the creature rather than the Creator, who is blessed forever! Amen. — Romans 1:25

A man in the Charlotte, NC area who masquerades as a shepherd of God’s people and a minister of His word now claims that God has “instructed” him to stand up for LGBTQ rights. In a piece he wrote at The Charlotte Post — aptly titled My faith instructs me to stand up for LGBTQ neighbors,Protecting rights of all are essential, Ray McKinnon of South Tryon Community United Methodist Church writes,

I lead a congregation on the south side of Charlotte. We’re an affirming congregation, and I’m an affirming Christian. But even more than that I believe strongly in the call for justice. As part of this, my congregation welcomes our LGBTQ siblings with open arms.

I preach that, as a part of our Christian faith, we need to love our neighbors as ourselves. That means all our neighbors, including those who are LGBTQ.

Let’s just be clear about one thing: McKinnon may have some kind of faith in something, but it isn’t Christian.

But the Methodist Church is several years ahead in this movement — and the statements of Satan’s tools like McKinnon clearly show that. He continues,

The disturbing reality is that millions of LGBTQ people in North Carolina and across the country report experiencing discrimination in their everyday lives. What will happen now as essential needs increase and resources — in grocery stores, and medical facilities are scarce?  As it is, transgender women of color disproportionally face extremely high rates of violence and discrimination. As a black man fighting for civil rights and justice for fellow people of color, how could I stop short of extending those calls to other marginalized groups?

To be honest, I was apathetic about LGBTQ people for many years. Raised in a conservative Baptist home, I didn’t look beyond the scripture as it was presented to me. After someone close to me came out – one of the most loving, caring Christians I knew – I did some soul -searching.  I know now that we’re all God’s children.

But, you see, these false shepherds have a defiled and depraved idea of what it means to love God and man. You can not love God if you align your heart, soul, and mind against His nature. The unchanging God is clear–he hates sin. Yet, McKinnon wants to embrace it. Further, he hates people because instead of giving the life-saving truth of the gospel of Jesus Christ, he wants the Church to not only tolerate sin but defend it.

The worst part about this is that the Church tolerates men like McKinnon who masquerade as ministers of light while leading souls straight to the pits of Hell where there is no escape.