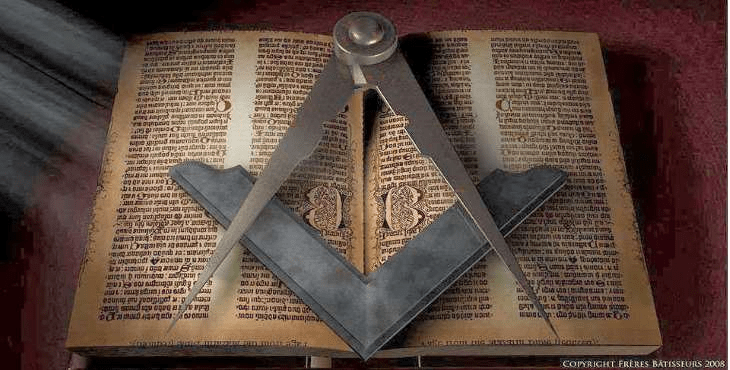 Freemasonry is rampant in the Church, both in the Evangelical Church as well as other denominations. Freemasonry is a brotherhood — a secret society — of men who, as they claim, come together to work for the common good of humanity. In fact, Freemasons actually do a lot of charitable work and there has been a lot of humanitarian good that has come from this group, such as hospitals.

But is Freemasonry a religion, and is it compatible with Christianity? The short answer is no. The long answer is no, absolutely not. And here are five reasons why.

1.) Freemasons swear secret oaths. Most Christians do not understand the practices and rituals of the Masonic Lodge. Before a candidate can become a Freemason, one must swear an oath upon initiation declaring that he is,

binding myself under no less penalty than to have my throat cut across, my tongue torn out by the roots, and my body buried in the rough sands of the sea at low water-mark, where the tide ebbs and flows twice in twenty-four hours; so help me God, and keep me steadfast in the due performance of the same.

The Scriptures strictly forbid this kind of oath-taking.

2.) Freemasons practice idolatry. Freemasonry claims that it is not anti-Christian. Further, it also claims that it is not anti-“any religion,” therefore, you can be of Christian, Islamic, Jewish, Hindu, Buddhist, Mormon, and Deist faith. Masonry, not only encourages Christians to worship God — they also encourage Muslims to worship Allah, Buddhists to worship Buddha, etc. The Bible clearly teaches that this is idolatry and that God hates it, as it is the first two commandments.

3.) Freemasonry teaches Universalism. Undoubtedly, one of the worst affronts to the teaching of God is a denial of the exclusivity of Christ as Lord and Savior. Freemasonry teaches that all religious paths lead to the same God. Consider their official name for this universal god they worship, they call him The Great Architect of the Universe. They fail to acknowledge him as the thrice-holy God, the Father, Son, and Holy Spirit. They assign him a generic name that is fitting for any of their members.

Consider the following excerpt from a Masonic candidates guide-book, it states,

The central piece of furniture in the lodge is the altar. The altar is symbolic of many things. As a temple symbolizes the presence of Deity, the altar symbolizes the point of contact with that Deity. Its location, in the center of the lodge, also symbolizes the place which God, or The Supreme Architect of the Universe, or TSAOTU, has in Masonry, and which He should likewise have in every Mason’s life. The candidate approaches the altar in search of light and also assumes all his Masonic obligations there. In the presence of his God and his brothers in Freemasonry, he offers himself to the service of the Supreme Architect of the Universe and to mankind in general. The altar is the point upon which life in our Masonic lodges is focused, and it should be accorded the highest respect.

4.) Freemasonry claims esoteric secrets. The Bible exhorts Christians to be transparent, but the Masonic lodge teaches contrary to this biblical truth. Jesus taught that all of His teachings were made known to everyone — nothing was kept secret.

Jesus answered him, “I have spoken openly to the world. I have always taught in synagogues and in the temple, where all Jews come together. I have said nothing in secret.

Freemasonry claims that they have a secret knowledge that’s made available to them that isn’t available to all people. Norman Crabbe writes in his Fundamentals of Freemasonry,

Freemasonry uses allegorical symbols to teach a philosophy concerning the nature of the Creator, the origins of the universe, and humanity’s universal destiny. The religious doctrines in which most people are raised are designed to satisfy the basic needs of the general population. To get a truer understanding of the nature of Deity requires a long-term commitment of study. The Freemasonic initiate is put on the path of this study by being initiated into the fraternity of Masonry, a Westernized religious Mystery school. If the initiate studies the ritual, he will receive, proportionate to his ability to understand, deep mystic revelations regarding the nature of the universe and our mystic journey through it. Freemasonry keeps alive this knowledge from generation to generation until such time as it is understood and accepted by all beings.

The universal, eternal, immutable religion, such as God planted it in the heart of universal humanity. No creed has ever been long lived that was not built upon this foundation…The ministers of this religion are all Masons… Its sacrifices to God are good works… and perpetual efforts to attain to all the moral perfection of which man is capable.

Freemasonry is an organization that thrives off of charitable works. It’s not that these works in and of themselves are bad, it’s that the underlying purpose is a man-centered morality that merits them favor in the eyes of whatever God they choose to worship or appease. Of course, Bible-believing Christians believe that salvation is by grace alone, as Ephesians 2:8-9 states,

For by grace you have been saved through faith. And this is not your own doing; it is the gift of God, not a result of works, so that no one may boast.

Yet, despite this, Evangelical churches are rampant with Freemasonry. Laypeople, deacons, even pastors are notable Freemasons. Yet, if you question them on the craft they partake in, more often than not they deny the existence of this. They brush it off. The truth is that many aren’t aware of the official teachings of their fraternity and view it simply as a means to perform good works as a result of the grace we’ve received. But the reality is that being caught up in Freemasonry is a form of bondage that Christ actually died to free us from.