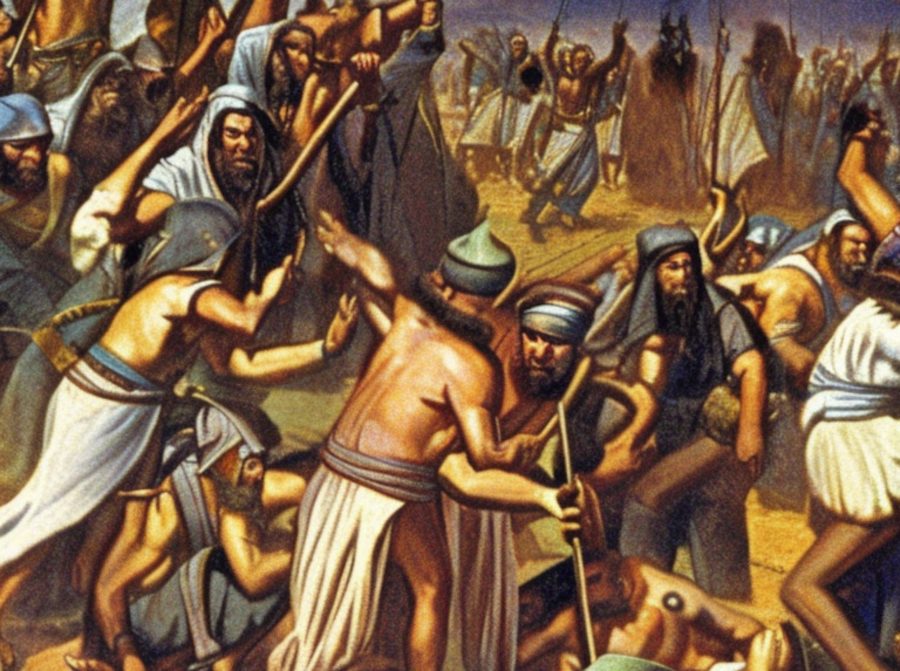 The passage in Deuteronomy 20:10-20 is often misunderstood and has been used against Christianity by non-Christians to suggest that God condoned horrific acts of violence such as rape. It is important to understand the context in which this passage was written and to interpret it within the framework of the overall message of the Bible, which is one of love, respect, and dignity for all people.

In the book of Deuteronomy, God gives the Israelites a set of instructions as they prepare to enter the Promised Land and take possession of the land that God has promised them. One of the key themes of Deuteronomy is God’s promise to the Israelites that he will give them the land of Canaan and will help them to defeat their enemies.

The passage in Deuteronomy 20:1-20 is part of this larger context, and it specifically deals with the issue of warfare. In this passage, God gives the Israelites instructions on how to approach cities that they are at war with and how to deal with their enemies.

From a biblical perspective, it is important to understand that God’s judgment on the Canaanites was not arbitrary or capricious. Instead, it was the result of their disobedience to God’s commands and their idolatrous practices. Throughout the Old Testament, God repeatedly warns the Canaanites about the consequences of their disobedience and urges them to turn from their idolatrous ways and follow him. However, the Canaanites refused to listen and continued to worship false gods and engage in practices that are detestable to God.

As a result, God ultimately judges the Canaanites and commands the Israelites to conquer the land and defeat their enemies. While this may seem harsh to modern and uninformed readers, especially those who do not know God, it must be understood within the context of the times in which it was written and the cultural practices of the ancient Near East. But it’s important to remember that even these practices were ordained by God to be used for His own glory during these times. From a biblical perspective, God’s judgment on the Canaanites was a consequence of their disobedience and their refusal to turn from their idolatrous ways.

The passage goes on to say that the Israelites are not to “leave alive anything that breathes.” This has been interpreted by God-haters as a command to commit rape, or at least that it somehow condones the heinous act. But this interpretation is not supported by the context or by the overall message of the Bible. Instead, the passage should be understood in the context of God’s covenant with the nation of Israel and in the type of warfare ordained by God during this time in which the complete destruction of an enemy was considered a necessary part of the victory.

This included the killing of all the males in the city, as well as the destruction of the city itself and the seizing of its property. The goal was not to commit rape or other forms of sexual violence, but rather to ensure that the enemy was completely defeated and could not pose a threat in the future. Not to oversimply it, but also, upon the slaughter of their men, the choice was to either leave them to starve to death in the wilderness or marry them and take care of them.

It is important to note that the Bible consistently condemns rape and sexual violence. In Deuteronomy 22:25-27, for example, the Israelites are commanded to protect women from sexual violence and to ensure that they are treated with respect and dignity. This commandment is repeated in multiple other passages throughout the Old and New Testaments.

From a biblical perspective, the passage in Deuteronomy 20:10-20 must be understood in light of the overall message of the Bible, which is one of God’s glory and plan of salvation for His people. While the Bible does contain accounts of warfare and violence, these must be understood within the context of the times in which they were written and for the purpose God had in carrying them out. Ultimately, God’s purpose in Creation is to demonstrate His glory by revealing His attributes through His words and actions. In this case, God is demonstrating his justice and wrath against a people that refused to render unto Him the worship He is due—and He is using the nation of Israel to carry out His purpose.

It is most certainly His prerogative to do so and to question God’s actions in carrying out His wrath is to suggest that God owes His creation something—but He does not. God owes us nothing and that he chooses to save some despite our ultimate rebellion against Him is an act of mercy that is incomprehensible to us. Only the work of the Holy Spirit can reveal to us such kindness that leads us to repentance.

I don’t know how many times some pagan comes up with a difficult Old testament passage and I see Christians tripping over each other trying to explain it a way as not being quite as bad as it seems. God told Israel that he would cause them to eat their children. That’s what he said, and Jeremiah reports it actually happening in the book of Lamentations. The fact that unbelievers who judge everything by their own self-exalting standards don’t like that, is too bad.

On the other hand, we are obligated to explain scripture in a way that is faithful to what God is conveying. In this case, no God didn’t just randomly pick somebody to beat up. They were wicked, idolatrous Pagans who were occupying the land that was promised to God’s covenant people. He had every right to command whatever he thought necessary to accomplish that promise. Whoever likes it or not, He’s not concerned about that. The Canaanites were extended mercy they didn’t deserve even then when God offered them a way to escape judgment through repentance and faith.

Of course, we shouldn’t expect any of this to carry any weight with dead men rapt in their hatred of God. Our job is to tell them, but what happens between them and God as a result, we have no control over

However, under no circumstances should these passages either be used to justify horrific sinful actions such as rape or to suggest that God approved of these actions. Those who do are simply out to try to discredit the Bible because they believe they have a personal axe to grind with God. Let it be known, however, that going toe to toe with God will only end your ultimate destruction.

Join our ad-free Substack community to read and post comments...
- Advertisement -
Previous article
The Dark World of Modern Christian Music
Next article
Uncovering the Truth Behind the Song “Mary Did You Know?”: A Biblical Analysis of the Nativity Narrative