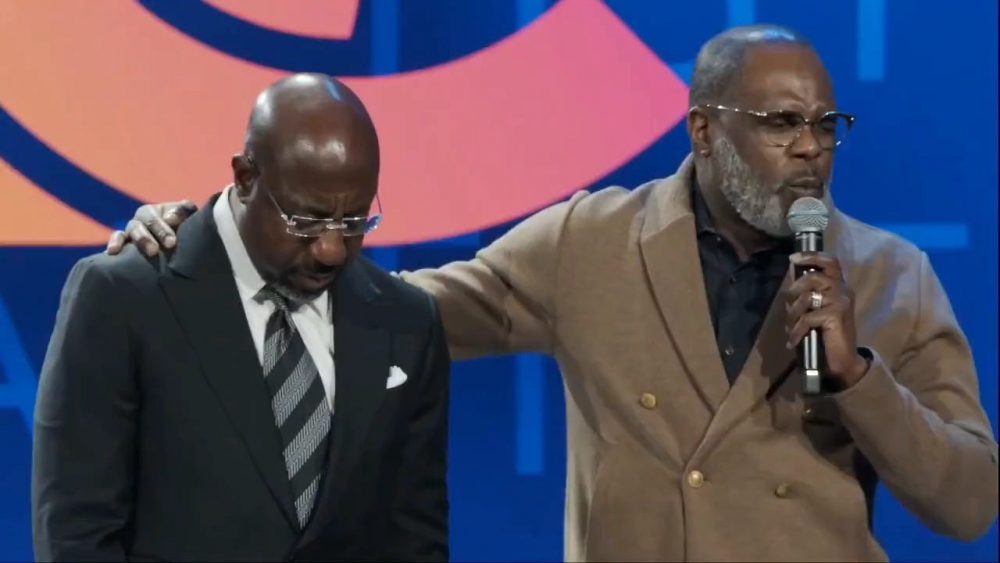 You’re probably familiar by now with the new woke religion that leftists have created around their Messiah figures like Stacey Abrams and Raphael Warnock. We’ve brought you many stories about how left-wing churches have replaced Jesus on the cross with Stacey Abrams as well as many stories about Warnock and his being elevated to the status of deity among the saints of the woke church.

And while Abrams’s landslide loss in the election for governor of Georgia was still lauded as a “win” by those who grovel at her feet, it’s clear that, well, God didn’t choose her. And while I don’t claim to know the future outcome of the runoff election in Georgia between Warnock and Herschel Walker, some pastors surrounding this man have already declared victory in the name of God.

First, you may remember Warnock’s tweet from last year denying the efficacy of the resurrection of Jesus. Warnock, a pastor himself—who happens to support homosexuality, abortion, and basically anything the Ten Commandments are against—tweeted out that the meaning of Easter isn’t really about the resurrection. We don’t need that stuff, we can save ourselves by practicing social justice—i.e. supporting gay rights, abortions, feminism, redistribution of wealth, and every other leftist cause.

Now, a pastor, in an emotionally charged sermon with the worship band playing at full throttle, Bishop Craig L. Oliver Sr. of Elizabeth Baptist Church prays Psalm 23 over him while calling him Nehemiah, David, etc.

This is really fascinating to watch all of this taking place in these liberal churches. If this were happening in a conservative church with a right-wing politician that didn’t support abortion or LGBTQ rights, it would be all over the news, the IRS would be pulling all tax-exempt statuses, and the left would never let it go.