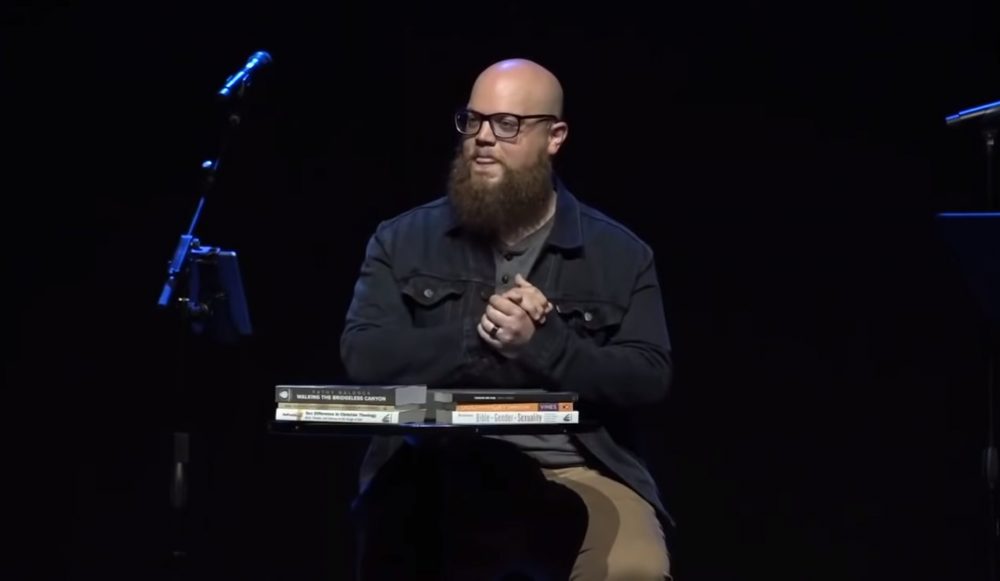 If you take your children to this church, you are disobeying the commandments of God to “bring them up in the discipline and instruction of the Lord” (Ephesians 6:4). A growing congregation in the Austin, TX area is pastored by a man named Zach Lambert.

I had not heard of this church or this person before today, yet, interestingly, I found out that he had already blocked me on Twitter. This tells me that he knows that what he posted is anti-Christian horse garbage and that he knew I was going to call it out if I saw it.

Well, I still saw it. And it is most definitely anti-Christian junk and well-deserving of rebuke.

Lambert, who pastors Restore Church in Austin, TX, recently preached a “sermon” about homophobia and transphobia where he affirms these perversions against God and nature while arguing that the Bible has nothing to say about this sin. He then doubled down on this claiming that the Bible affirms not just sexual perversions, but various other forms of social activism of varying degrees of heretical-ness (is that a word?).

In reality, there’s no way to even deal with somebody like this except to simply mock them. This is arrogance on a monumental scale. “Because of the Bible and not in spite of it.” Again, this means that all the Giants of the faith for the last 2000 years that went before got all of this wrong—every one of them from the first century until the last few decades. All of the great champions and warriors of the faith, many of whom gave their lives in service of Christ in his word—all of them got all of this wrong.

And just like Dwight McKissic, who says that the entire church has had the wrong teaching on women pastors for the last 2000 years until the modern feminist movement uncovered and corrected it, it’s that arrogance and self-exalting pride that writes these guys off just as much as the heresy they teach.

It’s also an accusation against God himself, that he left his people in the dark on such key issues until these clowns came along. If these views are of such key importance, how could the one true and living God not make them known until now?

This is a strong delusion. A Spirit of slumber wherein these people have been given over to a depraved mind according to Romans chapter 1. Anyone walking in the level of Bible-butchering darkness that men like these do is not a child of God. This is not a faithful believer with a blind spot here or there, this is somebody for whom The Holy Scriptures are putty in his mind to form in whatever way he sees fit. It’s the hiss of the serpent asking “hath God said?” in the 21st century.

Again nobody even debated these issues before the last few decades. This is not like the great church councils where foundationally important issues were debated and settled by God’s providence. They never even came up because nobody ever even thought to—they are just that absurd on their face if the Bible is your standard. And yet here this guy is proclaiming that the Bible is so clear on these things that he believes them all because of it and not in spite of it. That is the epitome of strong-held bondage to the spirit of the age.

Zach Lambert is a pretender, and he would be doing himself a favor by wiping the name of the son of God from his lips while proclaiming his heresy and immorality. It will go easier on him in the judgment.

I appeal to you, brothers, to watch out for those who cause divisions and create obstacles contrary to the doctrine that you have been taught; avoid them. —Romans 16:17

Join our ad-free Substack community to read and post comments...
- Advertisement -
Previous article
False Teacher of the Day #49: Becky Tirabassi
Next article
Kirk Franklin Masquerades as a Man of God, But He is a Lost Cause Who Needs to Repent and Believe the Gospel