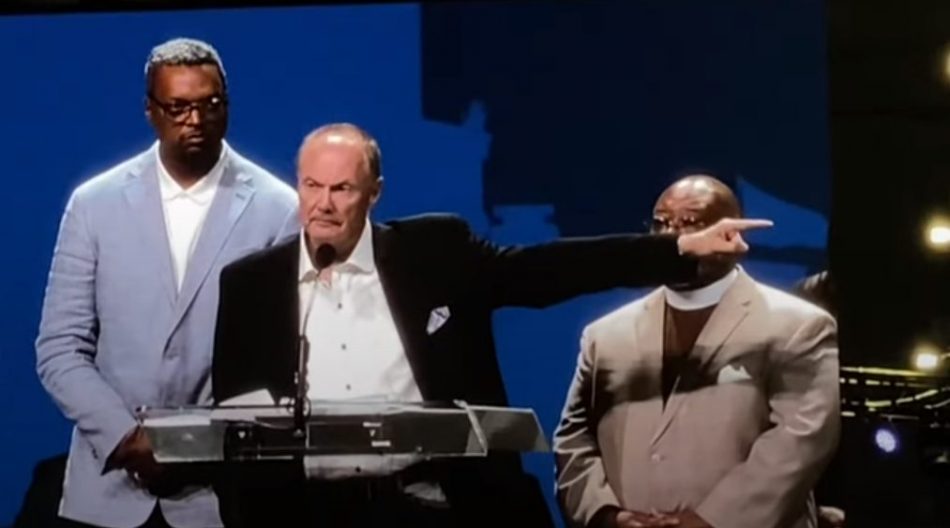 Southern Baptist Theological Seminary, the flagship seminary of the Southern Baptist Convention, is riddled with heresy. This publication has argued relentlessly that the social justice movement–which is heavily promoted at Southern Baptist seminaries through Critical Race Theorists like Matthew Hall–is a false gospel with a false doctrine of man, sin, and restitution.

Hall, the Provost of Southern Seminary, has heavily promoted ungodly ideologies of race, racism, and systemic injustice that are incompatible with biblical teachings on sin. Hall even went on a podcast to broadcast that by the very virtue of his skin color, he is and forever will be a racist and a white supremacist.

Russell Fuller, a former professor at SBTS who was fired shortly after signing the Statement on Social Justice, was recently interviewed by Worldview Conversations where he predicted that the current sham investigations into the Executive Committee by SBC leftists would spell the end of the denomination. The investigations, which were sparked by a political hit job after former ERLC head Russell Moore made false accusations in a “leaked” letter to the SBC, are currently causing serious legal problems–including the loss of legal counsel and possibly insurance–that could, actually, bankrupt the entire denomination.

James Merritt, the father of the openly gay “Christian” journalist, Jonathan Merritt, and who is unable to bellow his way through a coherent thought without looking like an angry sailor who dropped his last cigar in the ocean, launched his attack against Russell Fuller on Twitter in response to Fuller’s concerns.

Let’s just be clear, Merritt and men like him are not fit to lead churches let alone denominations. They stand with the Cows of Bashan–like Beth Moore who through money and influence oppress the godly into silence and obscurity. Merritt, who chaired the Resolutions Committee earlier this year, wouldn’t even allow a critical discussion against Critical Race Theory to take place at the annual meeting last June. Instead, he defended it; and he gripes that someone would dare suggest that Southern Baptist seminaries are teaching heresy.

To be clear, Southern Baptist seminaries are teaching heresy. While there are many fine professors at these seminaries, not all of them are. And it’s not just Critical Race Theory that’s being promoted. Fuller accused a professor of teaching that the Bible is full of myths. Fuller writes:

The liberal drift of Southern Baptist Theological Seminary in Louisville, Kentucky has resulted in the seminary knowingly hiring, maintaining and supporting false teachers who have taught and published works supporting;

1. mythology in the Bible,
2. postmodernism denying the objective/stable meaning of a text and the provability/verifiability of the text (including a denial of a messianic paradigm),
3. social justice heresy designed to replace the gospel, and
4. critical race theory and intersectionality promoting secular values and corrupting the gospel, while refusing any accountability or justification for allowing anti-Christian instruction, beliefs and conduct contrary to the Seminary’s Abstract of Principles.

This publication has reviewed the dissertation of the professor in question here, and there is no question that this professor believes this heresy.

Merritt, on the other hand, who can’t distinguish his elbow from his left toe–a man who broadcasts himself on Heresy Central known as TBN–certainly does not have the mental or theological capacity to determine what is or what is not heresy, nor does he care. Merritt, just like the rest of the circus clowns running the denomination, is only interested in pushing their leftist agenda and is willing to destroy anything or anyone in their path to make it happen.