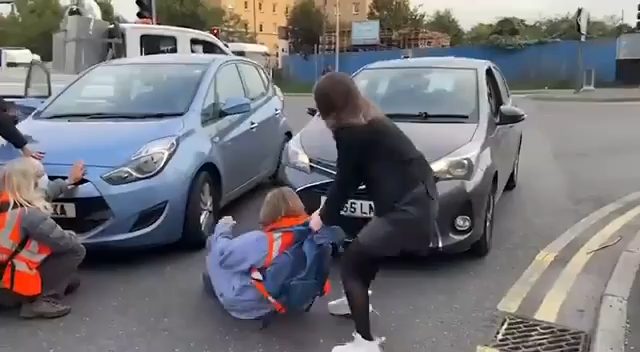 Environmental activists in Britain have the public upset after a protest involving these left-wing idiots cost people their livelihoods. During the protest, a group of circus clowns systematically laid in the streets as angry drivers took matters into their own hands dragging them one by one out of the street.

The protestors, however, managed to cost at least one man his job after repeatedly re-entering the streets as the citizens removed them.

Where are the police? Where is the government? Presumably, they’re too busy arresting people for not wearing masks or leaving their homes unvaccinated.

This kind of behavior is not only illegal but detrimental to a functioning society. While the courageous citizens were somewhat effective at removing these fools and allowing some traffic through, the negative impact it had on many people’s lives should anger that nation.

Sadly, this is what happens when you neuter your population and strip their rights away. This is nothing more than mass chaos.

Join our ad-free Substack community to read and post comments...
- Advertisement -
Previous article
Andy Stanley Says Church Should Stop Meeting For the “Benefit of the Community”
Next article
Ron DeSantis Fines Florida County 3.5 Million For Attempting to Skirt His Ban on Vaccine Mandates