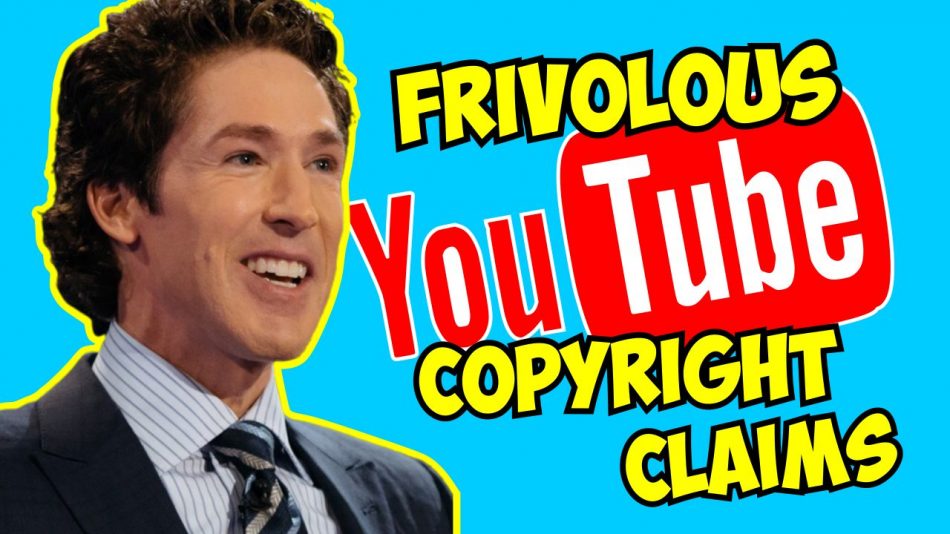 When the amount of power that an enormous amount of wealth and prosperity gives you goes to your head, you believe you can do anything. This is par for the course for the world’s richest pastors; it’s like a Lifestyles of the Rich and Famous, Prosperity Preacher Style.

Over the years, Reformation Charlotte has been threatened with lawsuits by Andy Stanley, Rick Warren, and most recently, Joel Osteen. I recently published a critique of Joel Osteen on YouTube whereby I used about a 1-minute clip from a recent “sermon” of his with about 20 minutes of commentary and criticism. If this isn’t the clearest example of the fair use doctrine, then there is no such thing as fair use.

Nonetheless, Osteen came after me.

According to the email I received, my criticism was initially flagged by YouTube’s Content ID system–a system largely available to only the biggest YouTube channels. When a user uploads a video to YouTube, the Content ID system scans the video against an audio database that large channels are able to submit their content to, and will notify these large YouTube creators if there is a match. The YouTube creator of the original content then gets to decide how to proceed. Their options include:

At this point, Joel Osteen has proceeded with the second option, claiming ownership of my video, and monetizing it for himself leaving me with no option except to dispute the claim and risk a DMCA copyright strike. I have decided to dispute the claim as my video is fair, legal, and protected under the First Amendment as well as the fair use doctrine of the U.S. copyright laws.

However, the bigger issue here is that even though I am well within my legal right to use the content under the fair use doctrine, small publishers like Reformation Charlotte–who aren’t backed by millions of dollars and first-in-class lawyers–stand little chance of succeeding against big corporate publishers like Joel Osteen. And they know this. In fact, the entire Content ID system is built to benefit the big, rich publishers while demoralizing the smaller publishers and acts as just another form of Big Tech censorship.

This is how Joel Osteen, Steven Furtick, Rick Warren, and Andy Stanley silence their critics. They know that most small publishers will simply choose to back off the criticism altogether because it isn’t worth the legal battle for them.

Admittedly, it is not worth the legal battle for Reformation Charlotte either. If Joel Osteen decides to uphold his copyright claim, I do not have the financial resources to battle him in court. I will have to either let him monetize the video for himself or remove the video.

Removing the video is not an option. I can assure you that Reformation Charlotte will not be silenced. While we may lose what little bit of income we make, the truth is more important than that. The bottom line is this: we cannot depend on YouTube or any other online platform to protect or defend the rights of small publishers like Reformation Charlotte. So we will be forced to eat whatever losses these giants force upon us. We depend much more on our supporters to continue our work, who we appreciate more than anything.

You can rest assured that we will not stop defending the truth no matter what the cost is. It’s what we do, it’s why we exist. We started from nothing and we will die with nothing.