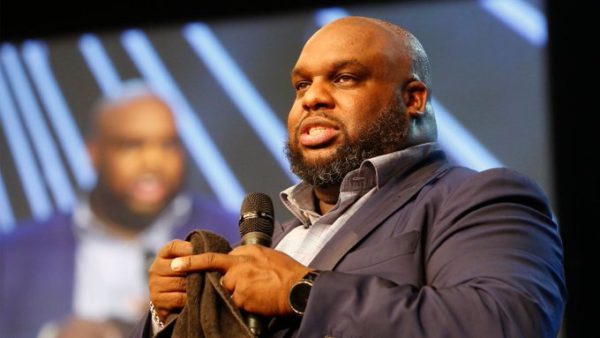 You may remember the scandal last year when John Gray, pastor of Relentless Church and former associate of Joel Osteen made headlines for gifting his wife a Lamborghini after allegedly cheating on her. He was subsequently “restored” by T.D. Jakes — the infamous anti-Trinitarian prosperity charlatan who says worship is like sex and hymns are like female genitalia — who “laid hands on him” declaring him repentant.

Now, apparently, Gray is at it again — and this time, for grilled meats.

According to Hip Hop Wired, the host of Larry Reid Live exposed a series of Gray’s FaceTime videos that were posted online and “broke down in his signature fashion the nature of Gray’s latest alleged transgressions, which include him instructing his mistress to bring a two-piece swimsuit for a baecation situation. But what was especially alarming was Gray exposing that his wife, Aventer Gray, apparently doesn’t cook and Pastor Gray showed his son in the backseat of their car confirmed the fact by saying he has to eat pizza daily.”

“Another portion of the FaceTime videos,” according to Hip Hop Wired, “showed Gray instructing the mistress to prepare a variety of meats, which is something he probably needs to let go of but we’re trying to be kind here.”

Gray, however, denies having slept with the other woman but admits to “emotionally” cheating on her…because, yeah, that’s what cheaters do. Gray took to Instagram to “honor” his wife after he was exposed — this third time — for cheating.

“I failed to uphold the holy standard of God in my marriage,” Gray writes. “And I’m sorry. Although you are the only woman I’ve ever slept with, emotional unfaithfulness is just as wrong. Sin is sin. People want to minimize one sin over another, when it all can get you sent to hell,” Gray continued.

“My marriage forced me to face both of me. Flesh versus spirit. It is every man’s battle. Loving God isn’t enough. Preaching Jesus isn’t enough. Face yourself. Get delivered. Or hurt the ones who actually love you the most.”

Gray then goes on to talk about “intense counseling” that he’s started. The reality of this situation, however, is that Gray doesn’t need “counseling,” he needs to get saved.