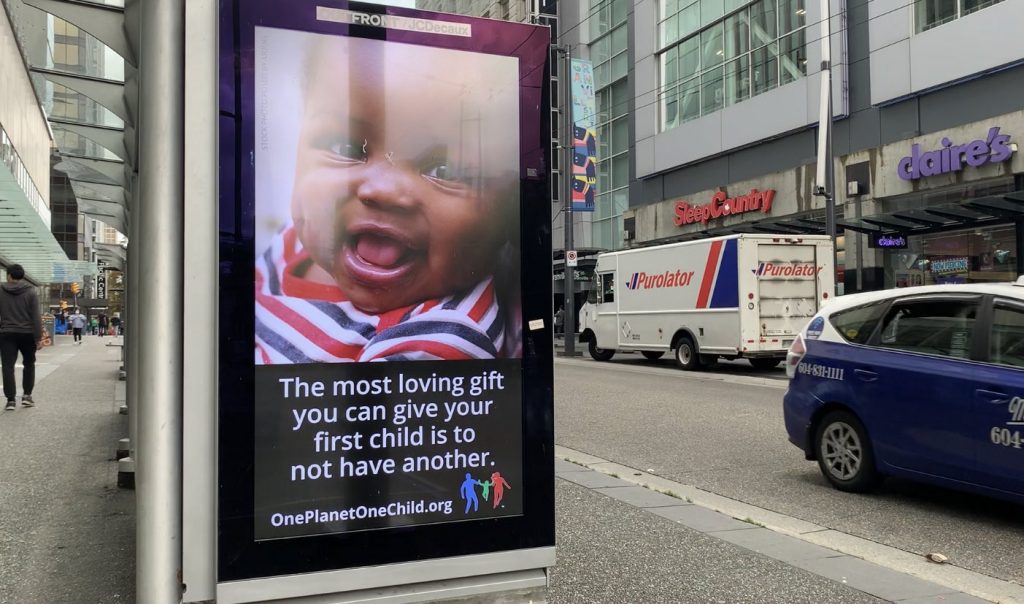 Billboards in Canada Encouraging Families to Stop Having Children

Billboards in popping up in Canada are encouraging families to stop having children. Signs, like the ones above which was spotted in Vancouver, are sponsored by One Planet One Child and are based on the false belief that the world is overpopulated.

According to the organization’s website, their idea is to “envision a world where no one suffers in dire poverty and misery for lack of enough food, water, and other basic needs. We see a world where all species thrive and where lower consumption and population are in balance with Earth’s finite resources.”

“We alert and educate that overpopulation is a root cause of resource depletion, species extinction, poverty, and climate change,” reads the mission statement on the organization’s website. “Our mission is to chart a path for human civilization that – rather than causing greater misery – enables good lives on a healthy planet. We advocate and support a smaller, truly sustainable human population – through dramatic and voluntary reduction in birth rates.”

The organization boasts that if their “one child” policy is followed for 100 years, the population of the world would decrease from 7.8 billion to around 3 billion — just over one third of today’s population. The organization also boasts that their policy would decrease “hunger” and “poverty,” yet denies that the economic depression caused by a century of population decline would have a destructive effect on hunger and poverty.