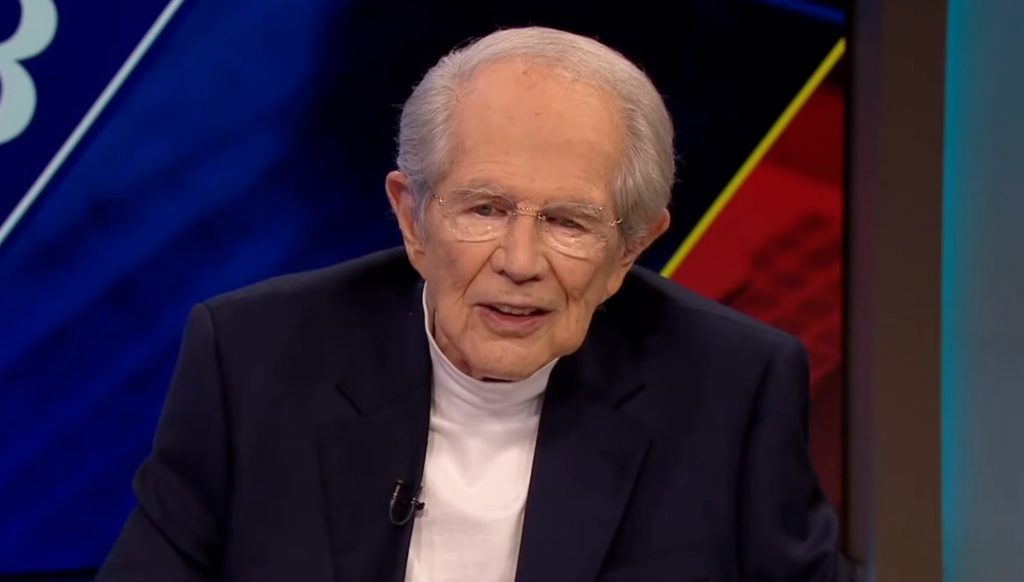 Pat Robertson Blames Wife For Husband’s Online Flirting, Says to Give Him “More Sex” to Solve It.

Pat Robertson, the charismatic blowhard host of The 700 Club for nearly 10,000 years and is clearly senile, recently blamed a woman who wrote in to him seeking biblical advice on dealing with her husband who has been flirting with other women online.

The woman who wrote in said that her husband had been complimenting other women on their photos online and that what he was doing was making her feel like she was being cheated on.

Lately, I have been seeing my husband liking photos of other women on social media and complimenting them on their looks. He’s telling them things he wouldn’t dare say to a woman in front of me. This has been tearing me apart. It makes me feel like I’m not good enough for him. It also makes me feel as if he is cheating on me by doing this. Am I wrong for feeling this way; am I over-reacting? I’ve been looking for a time to confront him about it, but I just can’t seem to find a way to tell him. What do you suggest I do?

A legitimate concern to say the least. Her husband is cheating on her as Jesus himself said that to even look at another woman with lust is to commit adultery. Of course, adultery is sin — and sin must be repented of. And her husband — who is committing sin against his wife and God — should have been called to repentance immediately by Pat Robertson.

However, Robertson had another idea. Unsurprisingly, the man who said that biblical creation is “nonsense” and said that Alabama’s abortion ban was “too restrictive,” offered up this advice to the wife instead.

I suggest the best thing to do is to be so loving, he cannot overcome the amount of love you’re going to give him. Just be a wonderful wife. And the fact that he’s a man, and he appreciates beauty is not necessarily a bad thing. I mean, that’s the male, the way they are! They just appreciate beauty. But you be the one, you’ve got the inside track. So you be so loving that he ain’t about to leave you and go look at somebody else, okay?

Following up with a question by his co-host who was clearly uncomfortable with his delusional reasoning who asked, “do you think it’s okay if he’s telling them things online that he wouldn’t say to a woman in front of her?” he doubled down with blaming the wife and told her that in order to stop his cheating, she needed to give him more sex.

Well, I don’t know what he’s saying to them online. Maybe he and his wife don’t share the intimacy they need. And they need to… She needs to… You make him a man. You build him up. Make them feel so good to be with you that he wouldn’t think of anybody else! That’s the way you do it. She’s got the inside track.

I remember playing football a long time ago. I missed a block and the coach jumped all over me, and I said, “Well, he got past me!” And he said, “You had the angle on him”… You’ve got the angle on him, honey. Use it. You are there every night. It’s your deal. Make it work, all right?

Of course, Robertson lost his way a long time ago — if he ever had it — and should be marked and avoided as a false teacher who does not understand the gospel in any meaningful way. So, in case the woman who wrote in to Robertson has a chance to read this, let’s offer up some actual, biblical advice. Your husband is a sinner, and he is committing sin. Your role as a wife is to submit to him in order that he may see your life as a living testimony of the gospel and won over to Christ himself. Your husband needs the gospel more than anything — more than he needs “more sex.” Give him the gospel and call him to repentance and faith in Christ.