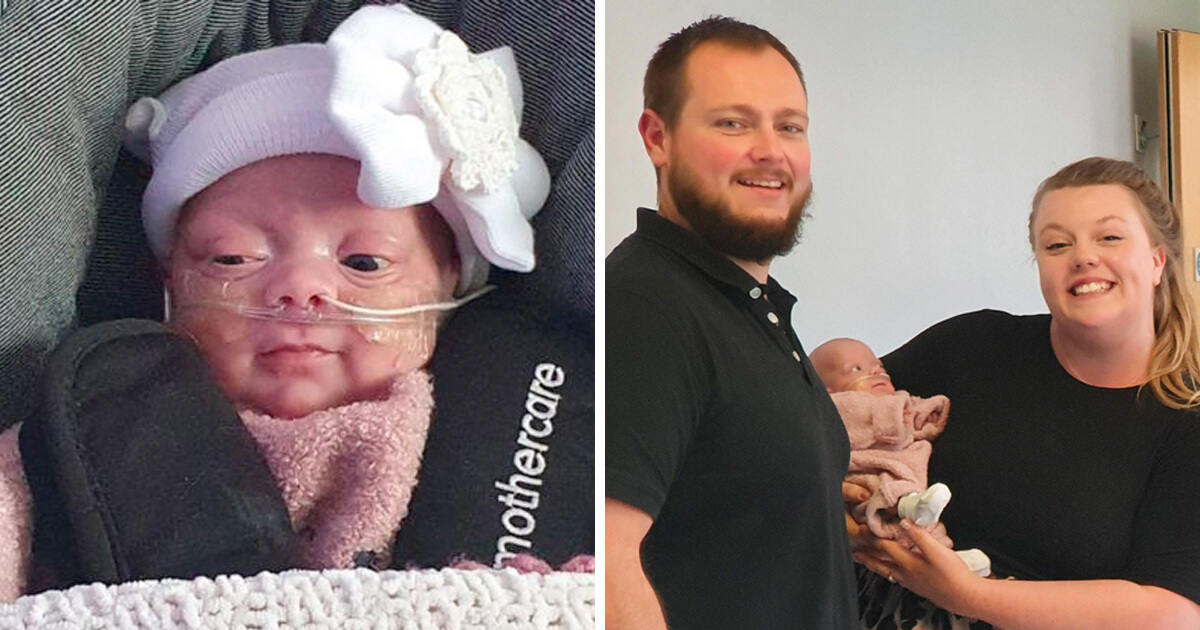 A hospital’s youngest premature baby who was born more than four months early has been allowed to go home.

Lilly Rae was born on 9 December at just 22 weeks and two days gestation at the Norfolk and Norwich University Hospital.

But despite weighing in at just over 1lb (511g) when she was born, about the same as a bag of sugar, Lily Rae proved to be a fighter.

Lilly was born with a beating heart, but struggled to breathe and move.

She was immediately put onto a ventilator, which she stayed on for seven weeks.

During her stay in hospital, Lilly suffered a bleed on the brain, underwent major surgery on a distended intestine and had to be put on a course of antibiotics to treat a series of life-threatening infections.

Then the coronavirus lockdown meant her mother Tayla Menear could only visit her daughter for two hours each day, while father Shane had to stay at home.

Thankfully though, following care from staff in the Neonatal Intensive Care Unit at the Norfolk and Norwich Hospital, Lilly has grown stronger every day.

And last week, on Tuesday morning, Tayla and Shane had a call from Lilly’s neonatal nurse to say she could be discharged home that day.

Lilly can now begin her next chapter of life at home with her mother and father.

Having been born at just 22 weeks and 2 days, she’s the youngest surviving premature baby that the hospital has ever looked after.

Leaving the ward last week, Tayla said: “I cannot believe this day has come. We never dared hope that this could happen.

“I still don’t think I will believe it until Lilly is tucked up in her Moses basket at home with me and Shane.”

Specialist neonatal outreach nurses will continue to monitor her progress with regular visits to see her at home.

Consultant neonatologist Dr Priya Muthukumar said she is “reasonably optimistic” for Lilly because “her brain scans while in the neonatal unit have been reassuring and she has made very encouraging progress so far.”

Taylar said staff at the unit had been “incredible”.

Speaking about her experience she added: “For the first few months of Lilly’s life no-one knew if we would ever reach the point of going home as a family.

“I have since come across other cases and now want people to know if they go into labour at 22 weeks not to feel hopeless. There is always a chance.”

Last year, it was revealed that the survival rate for extremely premature babies has doubled over the past decade, prompting new guidance allowing doctors to try to save babies born as early as 22 weeks into a pregnancy.

Additionally, a recent study has revealed the majority of premature babies grow up to be healthy adults without any major health problems.

Sadly, it is currently legal in Great Britain to abort unborn babies up to 24 weeks, or up to birth if doctors believe the baby will be born with a disability.

In 2018, the latest year with published data, 845 live births were recorded in England of babies with a gestational age of less than 24 weeks, according to the Office for National Statistics.

A spokesperson for Right To Life UK, Catherine Robinson said:

“It has been over a decade since abortion time limits were last debated fully in Parliament, in 2008. Since then the survival rate for premature babies has doubled.

“Additionally, independent polling from ComRes shows that 70% of women in the UK want to see the time limit for abortion reduced to 20 weeks or below.”