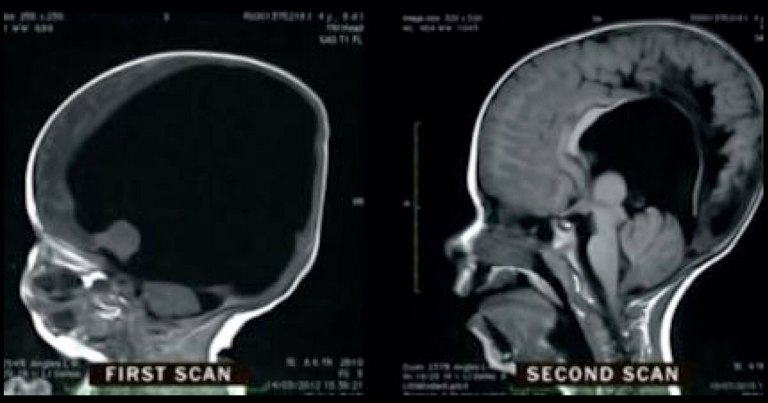 An eight-year-old born with spina bifida and only 2% of his brain has joined the weekly #ClapForOurCarers event as he continues his remarkable progress.

Doctors did not expect Noah Wall to live more than a few days and advised his parents, Shelley and Rob Wall, to consider abortion on five separate occasions.

But they refused, wanting to give their baby boy the chance of a healthy life, and Noah has been defying expectations ever since.

Describing the day Noah was born Shelly told the Mail: “The day he was born was amazing. We waited with baited breath.”

The couple were admitted to hospital a week before Noah was due to be born because the pressure on his brain was becoming dangerous.

There were 12 doctors in the operating theatre as experts performed a caesarean section and as Noah came into the world, he gave the doctors a sign.

Rob said: “He let out this amazing scream. We knew there was power there.”

Scans of Noah’s brain shortly after his birth show he had just 2% of his brain.

Miraculously, he kept on growing and so did his brain.

By the age of three, his brain had grown to a remarkable 80 percent of what it should be and is now nearly fully-functional, leaving medical professionals stunned.

Last year, Noah, who is paralysed from the waist down, moved his foot for the first time after undergoing pioneering therapy designed to alter the way the brain sends messages to his limbs.

Now the family sends regular updates to the doctors who told them Noah wouldn’t make it.

Shelly said: “He’s extraordinary. We send them emails and pictures and we take them presents at Christmas time.”

Every year, Noah gives out hundreds of Christmas presents to staff and patients at Great North Children’s Hospital in Newcastle – the hospital he was born in. With more therapy, it is hopeful he will one day deliver gifts on foot.

Rob said on the documentary, The Boy Without a Brain: “We were offered termination five times. It was never an option for us. To me, we wanted to give Noah that chance of life.”

“To hear his brain’s almost back to normal is beyond belief,” Shelly added. “Rob and I broke down when we heard the news. It was like a dream. I’ve never known anything like it. Even the consultants were in tears. Every time we see the doctors, they just shake their head. They’re just amazed at what he can do.”

Claire Nicholson, Noah’s consultant neurosurgeon, said in 2016: “He has surprised us through his life so far. He’s completely remarkable.”

She added that Noah teaches the medical profession that “you can’t ever know, doesn’t matter how many statistics you throw at something”.

Noah is just one of many babies who have defied the odds.

Estimates have predicted that 80 percent of unborn babies diagnosed with spina bifida, each year, are aborted. However, pro-life campaigners are hopeful that now the surgery has been made routinely available on the NHS the number of unborn babies terminated each year will fall.

Join our ad-free Substack community to read and post comments...
- Advertisement -
Previous article
Southern Baptist Pastor, Bart Barber, is Doing Online “Baptisms” Amid Coronavirus Pandemic
Next article
The Inherent Racism of the Mormon Cult According to Their Own “Scriptures”