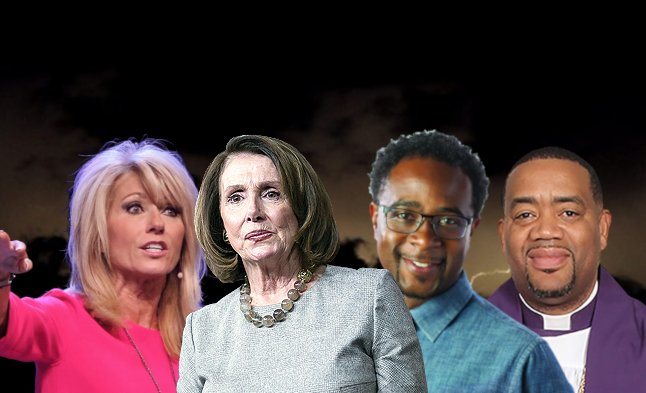 Evangelicals Lining Up Behind Moral Leader, Nancy Pelosi, To Impeach Trump for “Immorality”

Unless your head has been under a rock for the last year, you’re aware of the growing push to impeach the current president, Donald Trump. While the push has largely been made from the floor of the ultra-progressive House of Representatives — with Nancy Pelosi as high priestess of the legislative coven — recently, progressive and liberal Evangelicals have climbed on board the impeachment train.

Not to shill for the current president, but to lead with a disclaimer, I do support the president — mainly the conservative policies of the Republican party. I have no loyalty to the individual himself.

That being said, the charge to impeach Trump has been based on loose and evasive evidence that he coerced the president of Ukraine into investigating Joe Biden and his son, Hunter. To date, there is no hard evidence of this taking place. Yet, the impeachment hearings continue, and now, leftist Evangelicals are on board.

Recently, in an op-ed by Christianity Today’s editor in chief, Mark Galli, voiced his support for the move at his highly influential publication which was founded by the late Billy Graham. “The president of the United States attempted to use his political power to coerce a foreign leader to harass and discredit one of the president’s political opponents,” Galli writes, “That is not only a violation of the Constitution; more importantly, it is profoundly immoral.”

Lies. Again, not one shred of evidence to back up this claim. But — as we all know — this isn’t about Donald Trump’s “immorality,” it’s about his conservative policies which the left despises.

Several others have followed suit — mostly, those liberals who have always hated Trump because of his conservatism — and have used Galli’s hit piece as a springboard to launch their own campaigns against the president. One who stands out is Evangelical leader, founder and CEO of the black Christian publication, The Witness, Jemar Tisby, who says that historians will cite this for decades to come.

Now, keep in mind that Jemar Tisby is one of the leading agitators of the modern racial division in Evangelical churches in America. He regularly incites hatred and division between blacks and whites by indicting all white people with the inherent guilt of former white American slave owners simply by the virtue of the color of their skin and insisting that all white people are obligated to self-atone for their inherent sin through various and unending reparative acts. He’s also stated that working around too many white people can adversely affect his mental health. He calls himself a Christian, yet, his ministry supports a woman’s “right” to abort their child.

All the other regulars, of course, jump on board. Like the racist “Bishop” Talbert Swan, Beth Moore, Kyle Howard, et. al. They’re all leftists who worship the false morality of progressivism rather than the God who is the standard of morality. You see, these same Evangelicals relentlessly pushing for Trump’s impeachment citing his “immorality” as the reason are all fine with a murdering, God-hating, gay-rights pushing feminist, Nancy Pelosi leading the charge. Not one of them has spoken out against Nancy Pelosi’s immorality.

It’s because, in the mind of the left, it’s okay to brush aside serious issues of immorality, like abortion, so long as the bigger agenda of Marxism progresses. If you support this godless ideology or support candidates that do, don’t expect me to treat you as a fellow Christian.