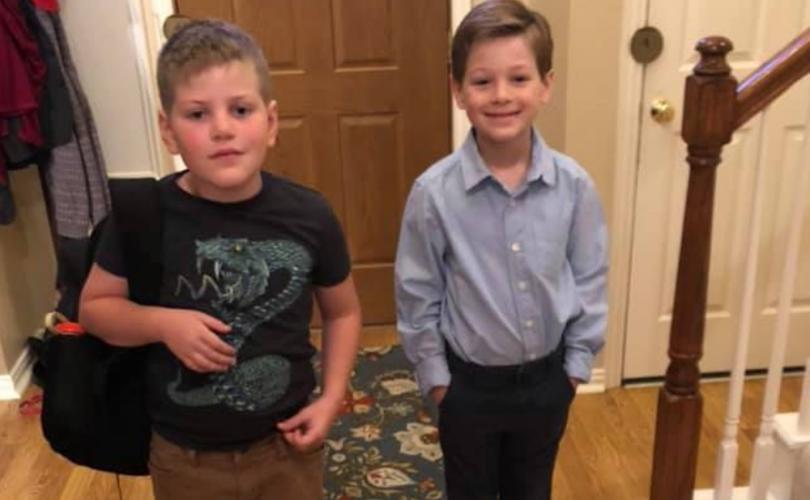 If you’ve been following the story of 7-year-old James Younger whose mom wanted to force him into a medical gender “transition” by giving him puberty blockers against the boy’s father’s will, you may not yet be aware that the boy has decided to attend school as, well, a boy.

Two weeks ago, a Texas jury ruled that the father of James would not be granted sole parental authority and allowed for the mother and ex-wife of the father to move forward with the transition. Thankfully, the courts ended up ruling that all medical decisions must be approved by both parents halting the mother’s ambitions to mutilate her son’s body for her own personal propaganda campaign.

The mother insisted that James wasn’t a boy, but instead, a girl named ‘Luna.’ The transgender movement is fueled by mental instability and the inability to reason using sound logic and objectivity. It is, indeed, a mental illness.

Lifesite News reports that the boy, after all, is said and done, does not want to be a girl as his mother claims, but instead wants to be who God made him to be — a boy. Thankfully this kid had a father who fought for him and did not allow the mobs of perverts to attack him and steal his soul.

LIFESITE NEWS — Seven-year-old James Younger, whose mother enrolled him in kindergarten as a “girl,” has finally been able to attend school as a boy for the first time.

James’ parents’ fight over whether he should be subjected to a gender “transition” garnered national attention after LifeSiteNews and The Texan reported on the trial.

Mr. Jeffrey Younger was fighting to prevent his ex-wife Dr. Anne Georgulas from “transitioning” James into “Luna.” The custody battle over James and his twin, Jude, sparked public outcry. Texas Gov. Greg Abbott called for an investigation into the situation, as did other conservative leaders.

On October 24, Judge Kim Cooks awarded Dr. Georgulas and Mr. Younger joint managing conservatorship and joint decision making of James and Jude. The new ruling increased Mr. Younger’s time with his boys and allowed him to have his boys on school nights. Dr. Georgulas will not be able to subject James to medical “transitioning” without Mr. Younger’s consent, although a court-appointed individual will be able to make decisions if the parents cannot come to an agreement.

In the ruling, one of the court findings highlighted a statement from Dr. Albritton, the custody evaluator, that Dr. Georgulas was “over and above affirming.” The court also found that “the Mother has exceeded the scope of the exclusive rights and duties provided in the prior order.”

Prior to the judge’s ruling, James had always been with his mother, who calls him “Luna,” when attending school.

Moving forward, James will be allowed to pick what name he wants to be called at school.

Join our ad-free Substack community to read and post comments...
- Advertisement -
Previous article
Reformed Apologist Says There Are “So Few” Sound Black Churches, “Woke Church” Pastor Calls Him “Racist”
Next article
Russell Moore Says if the Church Wants to Be More Missional, It Needs to Look More Like Sesame Street