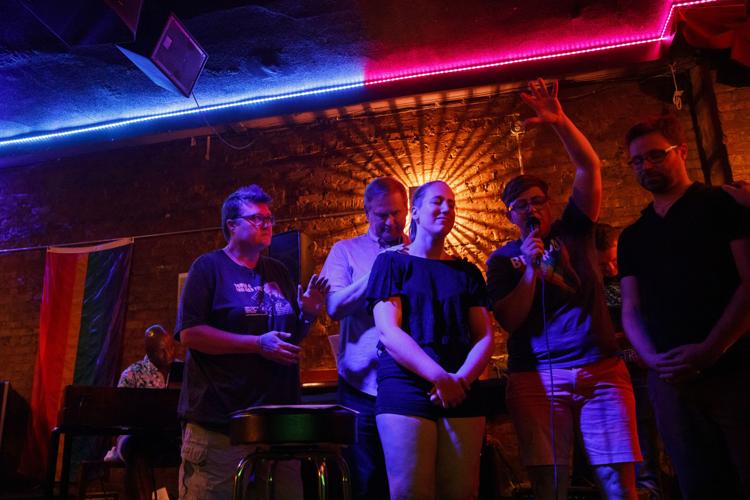 Queers in Chicago Have “Church” in a Gay Bar

It’s amazing what people will call a church these days. It’s an effort on the part of the enemy to obscure the meaning of the word “church.” But let’s just be clear — the word has absolutely nothing to do with a gaggle of sodomites joining hands and singing hymns with flashing rainbow-colored light shows and sharing stories of your last sexually perverted encounter in the name of Jesus.

But that’s exactly what is happening in a gay bar in Chicago. The following is a report from The Florida Times:

CHICAGO – The second Tuesday of every month, Affirming Worship holds church in Atmosphere, an Andersonville gay bar. The organization, founded in March 2019 by Kelly Ravenscraft, 22, and Michael McBride, 38, works against what a traditional Christian might think of as Mass. It’s a space for queer individuals in the Chicago area to discover or rediscover faith, separate from a church in which they may feel uncomfortable. It is, Ravenscraft said, a sacred space, but made so by the members within it.

The format is left intentionally open: Ravenscraft and other organizers perform music and invite attendees to share their stories. Rainbow colors flash across singers’ faces; the bass player wears a T-shirt: “Conversion Therapy Dropout.” A pride flag hangs against the brick wall, and Joshua Hundl, a drag performer, wears a dress that says “God is gay, nonbinary, pan, queer.” Ravenscraft steps up to the mic after the first song, smiles.

‘A QUEER PERSPECTIVE OF THE WORLD’

The common narrative, one Affirming Worship works against, is that queerness and faith are disparate. Hundl said that this easy story defies reality.

“Most queer people I’ve known have had some kind of experience in a church,” Hundl said. Ravenscraft agreed, saying that much of the “spiritual development and ethical development” of young people happens behind stained glass windows. Religion is, Ravenscraft said, a lens through which to view the world.

For some, the lens can crack. Ravenscraft said that for queer individuals, discovering identity can result in leaving or being forced out of communities of faith, but others remain – often quietly. According to Chicago-based minister Alicia Crosby, the common narrative is snake-eats-tail; if a queer individual of faith feels alone, they may not ever be visible to others. Daniel Bahner, education director for Keshet, a Jewish LGBTQ organization, said that though “LGBTQ folks have been around in our communities forever,” whether or not they are visible depends on feeling safe. Meanwhile, the divide between communities grows deeper.

“Sometimes it’s said by people in religious forums that we have to divorce ourselves from our queer selves to function in religious spaces,” Crosby said. She noted that the same can be true within LGBTQ spaces, as members of the community tend to mistrust religion “because of the harm witnessed or experienced.”

According to Crosby, division can be a pervasive mindset, generating the perception that queer individuals don’t belong in faith spaces. Frequently, this determination moves beyond the theoretical. In June, pride flags were vandalized by an unknown individual at Wicker Park Church; a transgender flag was marked with an X and a rainbow flag marked with the words “We love kids.” Wicker Park pastor Jason Glombicki said this unfortunately supported his “general lived experience” as a gay man, though the plan is to keep new pride flags up. Hannah Kardon, pastor at Urban Village Church, said that the incident, while emblematic of a preexisting divide, points toward the work in progress.

“The fact that there is this kind of response makes the fact that they have those flags even more important,” Kardon said. “The fact that there’s somebody out there who finds that message scary means that somebody else didn’t know they could be seen and loved, both in their belief in God and their trans identity, and was moved by them.”

Faith itself supplies this demand – Lilli Kornblum, board liaison to Or Chadash, an LGBTQ-focused Jewish congregation within Temple Sholom, said that “most of us are looking for some spiritual connection, especially now.” But in Chicago, conservative and progressive values run into one another, and spaces like Affirming Worship emerge from the fault line, spanning religions – Christianity, Judaism, Islam.

Kardon, who described Chicago as an “epicenter of a burgeoning movement of bold, queer Christian experiences,” said that this phenomenon is logical, since there’s a difference between belief and the institutions that build rules around it – the latter frequently only functions with the former.

According to Mahdia Lynn, executive director of Chicago’s Masjid al-Rabia, an LGBTQ and women-focused mosque, the only way to build a space for everyone is to “center disabled people and women and LGBT people.” In fact, Mandie McGlynn, an interfaith worshipper across Christian and Jewish denominations, said that placing queer experiences at the forefront of faith is an inevitable path forward.

“A queer perspective of the world is exactly what the world needs to improve,” McGlynn said. “That’s what queer people do and have been doing for a long time, is figuring out how to adapt ourselves to the world or how to adapt the world to us.” According to Lizzi Heydemann, rabbi and founder of Mishkan Chicago, the word “Israel” itself means “to wrestle,” after the Biblical figure who wrestled with an angel. Reconciliation, and the wrestling it requires, is the purest form of faith.

This faith can, however, yield damaging results. Emily Snowden, reverend at the Congregational United Church of Christ, used the term “spiritual trauma” as a means of describing the experience of many queer individuals hurt by religion. Spiritual trauma involves someone being told they’re unworthy by their religious organization, which represents God. Christian churches are able to seek official designations that indicate their church embraces queer individuals, but by the time people find these communities, scars have often already formed.

For those who choose to improve their communities from within, institutions make the process complex. Stephanie Skora, coordinating committee member of Jewish Voice for Peace – Chicago, said that addressing structural issues within Judaism is complicated, as there’s no governing body. The opposite is true for Christianity. In April, the United Methodist Church strengthened its ban on LGBTQ clergy and same-sex marriage. Isaac Simmons, an undergraduate who discovered the Methodist faith after coming out, knows that the current doctrine prevents him from being ordained. Still, he chooses to remain in the church.

“I believe that doubt and questioning and frustration is holy,” Simmons said. “Because I love the institution, I have the ability to question it while still supporting it.”

Simmons’ questioning is interdenominational. According to Chicago native Christopher Pett, progressive Catholics have long run up against their church’s conservatism. Pett is president of DignityUSA, an organization advocating for Catholic LGBTQ rights, and said many Catholics share his experience: devoted to their local parish, against decisions made in the Vatican. But Catholicism, Pett said, changes only in the long term.

And doubt spins both ways, as Lynn is suspicious of the short-term change Pett views as impossible. A quick fumble for inclusion, Lynn said, often reflects a misunderstanding of religious texts.

“Islam and Abrahamic traditions in general have a long and storied history of gender and sexual diversity within traditions,” Lynn said. “That’s why we don’t refer to ourselves as progressive. We view this work as a return to real core values.”

Ilana Rossoff, who attends both Mishkan and Tzedek Chicago, said that this applies equally to her experience of Judaism. She cited a story about Jewish feminist scholar Susannah Heschel, who reclaimed a practice of adding bread to a seder plate (intended to protest a rebbetzin’s declaration that there’s as much room for a lesbian in Judaism as a crust on a seder plate, where it wouldn’t belong). Heschel, feeling this was counterproductive solidarity, placed an orange instead, which is now common practice at Passover dinners.

“There’s a really beautiful toolbox of various rituals (in Judaism) that can be taken up really easily in service of affirming more parts of queer peoples’ lives,” Rossoff said.

For many queer people in religious organizations, tradition is vital, yet for some larger institutions, tradition is what prevents inclusion. That paradox is not lost upon queer individuals of faith. Part of Masjid al-Rabia’s mission is to provide a space for Muslims to have an ongoing discussion during services, as opposed to “listening to someone talk at you and going through the motions of praying,” said prison outreach coordinator Malik Johnson.

Lynn believes that being visible to queer and trans Muslims is important, but the institutional work can’t end there. “For the outside world, there’s an understanding that we need to move into what real inclusion work looks like,” Lynn said.

Unsurprising, then, that the question has become what builds a faith space in the first place. According to Kelli Beard, pastor at Holy Covenant United Methodist, queerness and community work hand-in-hand; Beard said that “whenever anyone on the margins finds community that welcomes and celebrates them, it’s transformative.”

For the nonreligious, this might be the LGBTQ community itself, but Ravenscraft said her two identities, queer and Christian, often felt too opposed to appease. Still, Hundl, who attends Urban Village and books drag performers for Chicago worship services, believes that affirming spaces are not unlike traditional church; in fact, church is often unlike itself.

“Every time I see a community that’s like, ‘If your child comes out, disown them’ call itself a church, it baffles me,” Hundl said. “I feel like I’m working within the framework of the church, just not within the church that’s been established.”

As for that traditional framework, the common refrain among queer Christians is that Jesus himself was marginalized, and that religion was made for queer people as much as their straight peers. But according to Beth Brown, pastor at Lincoln Park Presbyterian Church, faith can offer queer individuals even more, a fundamental introspection that can only come in conversation with God.

Sometimes reconciliation isn’t possible. Rich Havard, pastor and executive director of The Inclusive Collective, said that religion delayed his coming out. It also gave him the spiritual desire to come out at all. The clash is a queer tradition; McGlynn said that religion reminds her of her obligation to remember others’ suffering, even if it sometimes causes suffering itself.

It’s a daunting give-and-take, identity and the divine, even if queer individuals find space for it. Incidents like the vandalism at Wicker Park Church are a reminder that the common narrative often doesn’t care for divinity. Sometimes all there is to do is pack into a gay bar on a Tuesday night, sing and share.

At one point during the Affirming Worship service, a group of teenagers trickles in off the street. They stay for a moment, swaying to “This Little Light of Mine.” When the song ends, they leave reluctantly, filing out one by one. In their absence, the space is still for a moment – but the stillness feels comfortable, like the pause between two breaths.