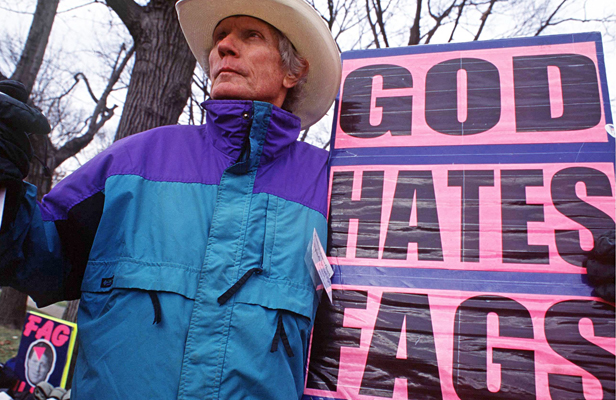 Did Westboro Baptist Founder Change His Mind About Gays on His Deathbed?

A rumor circulating the gay blogs on the internet are claiming that Westboro founder and provocateur, Fred Phelps, may have “repented” of his anti-LGBTQ stance on his deathbed. Pink News, a pro-sodomy anti-Christian news website reports that Phelp’s granddaughter, Rachel Hockenbarger, who has since left the church, said that she believes that her grandfather had a deathbed conversion from his anti-LGBTQ views.

He had told the people across the street at the rainbow house that they were good people. I do think it happened. I didn’t see it, but it’s been talked about with [church members].

Of course, what likely amounts to a pipe-dream from the pro-sodomy community (if you can call it a community) is rather far-fetched. If the most anti-LGBTQ activist in the world were to change his mind on homosexuality, think about the credibility that would give the LGBTQ. Yet, even if Phelps did change his mind, he only moved from one damning ideology to another. Phelps’ gospel offered no grace and was not of God. But neither is the affirmation of sin and idolatry.