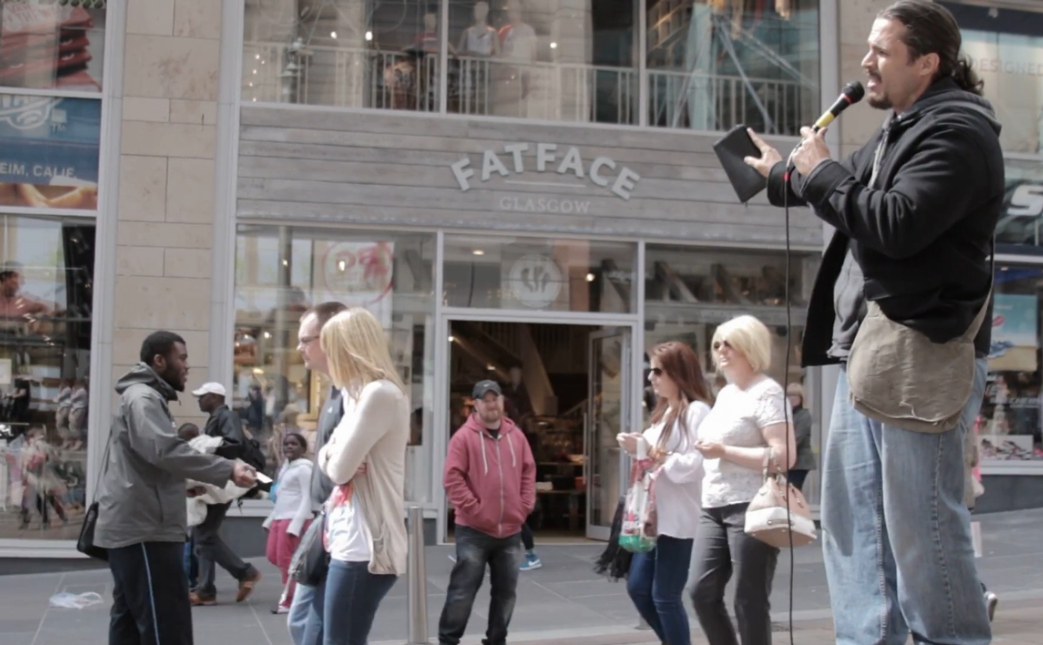 Street preaching is a unique calling and definitely not for everyone.  There is never a shortage of challenges hurled at the man on the box proclaiming the Gospel of Jesus Christ.  And why wouldn’t there be? To be sure, anytime the darkness is exposed to the light of the Gospel there will be confrontation and conflict.

Sadly, some of the greatest opposition to street preaching comes from the most unlikely source, professing Christians!  Those who profess to follow Jesus Christ are some of the biggest objectors to His message being proclaimed in the public square.  While street preaching is not the only method of evangelism, it is a way to reach the lost, most of whom won’t set foot in a church.

As Christians, we are to be subject to the authority of Scripture.  Recently brother Ryan Denton from Christ in the Wild Gospel Society released 3 new Gospel tracts.  One of them addresses this very topic that will help church folk and pastors alike.  That is, a biblical understanding of street or open-air preaching.  Here are 7 of the most common objections heard by professing Christians against street preaching while laboring for the lost, each followed by a response from God’s word.  Hopefully, if you are one who does not have a favorable view of street preaching, you will reconsider after reading this list.

1. ARGUMENT: Jesus and the disciples didn’t do it this way.

GOD’S WORD: Seeing the crowds, He went up on the mountain…and He opened His mouth and taught them (Matt. 5:1-2). And He sat down and taught the people from the boat (Luke 5:3). Go out to the highways and hedges and compel people to come in, that My house may be filled (Luke 14:23). Then the disciples went out and preached everywhere (Mark 16:20). So he reasoned…in the marketplace every day with those who happened to be there (Acts 17:17).

2. ARGUMENT: It’s not effective. It pushes people away.

GOD’S WORD: The gospel is the power of God for salvation to everyone who believes (Rom. 1:16). Faith comes from hearing, and hearing through the word of Christ (Rom. 10:17). How shall they believe in Him of whom they have not heard? And how shall they hear without a preacher? (Rom. 10:14). But only God…gives the growth (1 Cor. 3:7).

GOD’S WORD: Jeremiah said to him, “The Lord does not call your name Pashhur, but Terror on Every Side” (Jer 20:3). Jesus: Woe to you, Chorazin! Woe to you, Bethsaida!…I tell you, it will be more bearable on the day of judgment for Tyre and Sidon than for you. And you, Capernaum…You will be brought down to Hades…it will be more tolerable on the day of judgment for the land of Sodom than for you (Matt. 11:20-24). John the Baptist: You brood of vipers! Who warned you to flee from the wrath to come? (Luke 3:7). Jesus: You serpents, you brood of vipers, how are you to escape being sentenced to hell? (Matt. 23:33). And making a whip of cords, He drove them all out of the temple, with the sheep and oxen. And He poured out the coins of the money-changers and overturned their tables (John 2:15). Paul the Apostle: You son of the devil, you enemy of all righteousness, full of all deceit and villainy, will you not stop making crooked the straight paths of the Lord? (Acts 13:10).

GOD’S WORD: Cry aloud, and spare not, lift up your voice like a trumpet: show My people their sins (Isa. 58:1). You shall speak My words to them, whether they will hear, or whether they will forebear, for they are most rebellious (Ezek. 2:7). Give them warning from Me. If you don’t, they shall die in their sins, but their blood will I require at your hands (Ezek. 3:17-18). What the Lord says to you, that you must speak (1 Kings 22:14). Cursed be he that does the work of the Lord deceitfully (Jer. 48:10).

GOD’S WORD: And they rose up and drove Him out of the town and brought Him to the brow of the hill on which their town was built, so that they could throw Him down the cliff. (Luke 4:29). The Jews picked up stones again to stone Him (John 10:31). But when they heard this, they were cut to the quick and intended to kill them (Acts 5:33). They stoned Paul and dragged him out of the city, supposing that he was dead (Acts 14:19).

6. ARGUMENT: You should try being more charming or funny.

GOD’S WORD: Open rebuke is better than secret love (Prov. 27:5). For the wisdom of this world is foolishness before God (1 Cor. 3:19). Preach the gospel, and not with words of eloquent wisdom, lest the cross of Christ be emptied of its power (1 Cor. 1:17). When I came to you, brothers, I did not come proclaiming to you the testimony of God with lofty speech or wisdom (1 Cor. 2:1). My message and my preaching were not in persuasive words of wisdom (1 Cor. 2:4). For the time is coming when people will not endure sound teaching, but having itching ears they will accumulate for themselves teachers to suit their own passions (2 Tim. 4:3).

7. ARGUMENT: You look foolish doing it.

To order this or other tracts from Christ in the Wild Gospel Society, use the links below (short promo from Ryan below):

Join our ad-free Substack community to read and post comments...
- Advertisement -
Previous article
Southern Baptists Promoting Ministry That Believes It’s Natural For a Man to Desire to “Become One” With Another Man
Next article
Breaking: LifeWay to Close All of Its Stores This Year