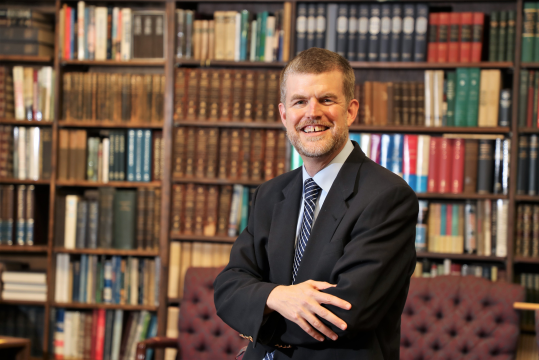 Thomas Kidd is a Southern Baptist Ethics and Religious Liberty Commission (ERLC) research fellow who is also a Baylor University professor and highly sought after speaker and author for The Gospel Coalition. Just last week, during the annual March for Life event in the nation’s capital, Thomas Kidd asserted that it was “not good” for Donald Trump to appear at the event and be identified with the pro-life movement.

Other than his politically-left slant and disdain for the current president who — by any discernible standard — governs more like a conservative than any president the country has seen in modern history, Kidd offered no valid explanation as to why Trump’s presence would be detrimental to the pro-life movement. Of course, since the ERLC has redefined “pro-life” to mean all things socialism, one can only deduce that Kidd is mad that the pro-life movement isn’t moving quickly enough to embrace his view.

But if hijacking a good movement — one that seeks to end the slaughter of innocent children around the world — and turning it into a system of race-based affirmative action, open borders, and mass immigration isn’t enough to sway Evangelical voters to vote Democrat, why not just lob slurs at Trump supporters and paint them all as evil, wicked self-aggrandizing racists.

In a recent article published at Desiring God (John Piper’s blog) titled What Happened to “Evangelicals”? Kidd does just that — he labels Trump supporters as racist, misogynistic power-grabbers. He writes,

In the wake of the 2016 election, evangelicalism went from being America’s most controversial religious movement to its most reviled one. The overwhelming support for Donald Trump among self-identified white evangelical voters unleashed a wave of vitriol against evangelicals, who (to critics) had thrown off their religious masks to reveal a racist, misogynist, and power-grabbing agenda.

He then goes on to urge pastors and leaders to “reflect on the roots of today’s evangelical crisis, and consider how they can influence their congregations toward a better way and witness with regard to politics.”

Of course, this is translated into pastors and influencing their congregations into “not voting for Donald Trump.” But, of course, the ERLC is politically-neutral, so there’s that.

He then goes on to explain how the American Evangelical Church, throughout the last several decades of history, became so politically divided among races — which is historically accurate but fails to acknowledge the theological differences that arose between the groups which are the ultimate cause of division. In fact, the greatest hindrance to racial reconciliation in the Church today isn’t politics — it’s heresy.

Yet, he argues, that white Evangelicals who vote for Trump do so not for theological convictions — such as standing on biblical principles including justice for the unborn, disapproval of social liberalism (gay marriage, drag queens in schools, etc.), and other biblically-aberrant ideologies — but instead, for self-preservation of racial superiority and power.

Of course, this is absurd and only one looking through the lens of secularism whose ideology is dependent on cultural influences can one actually ascertain such foolishness from the conservative movement. Yet, progressives tend not to place preeminent priority to objective facts, rather emotion and personal experiences. Kidd ends with a call for Evangelicals to “reconsider” their support for conservative politics.

Once the Trump presidency is over, whether in 2021 or 2025, white evangelicals will need to revisit their political commitments and their decades of attachment to the GOP. Hopefully they will do some soul-searching about what has been gained and lost. But for pastors, a more pressing concern may be the legions of Americans — some of whom are your congregants — who have the impression that something other than regeneration by the Holy Spirit has made them an evangelical.

Kidd should be challenged to put names behind those “white Evangelicals” who he says did so just to preserve themselves. And he should be challenged to consider that those who would support any party who serves only to oppose the God of the Scriptures should not only be disciplined by their Church but should not be considered in any way Christian.