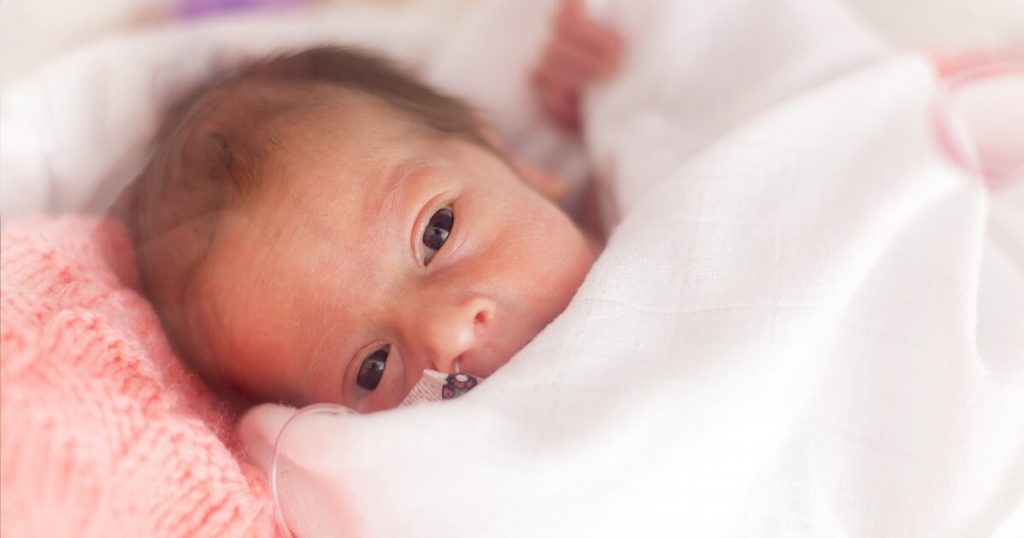 A baby girl given just a 5% chance of survival has beaten the odds and is now thriving at home with her parents Kym and Ryan.

With hands smaller than 1p coins, Isabella Evans was the smallest premature baby to be born in the UK, in over 15 years, at her birth on 14 June 2018.

Isabella had to be delivered prematurely by emergency caesarean after complications at 24 weeks, weighing just 12oz (340g), leaving doctors to fear the worst.

For the first week of Isabella was placed in bubble wrap to keep her warm and an incubator to help her breathe. Her parents could only hold their daughter in blankets for five minutes at a time.

And, at just three-weeks-old, the ‘little fighter’ underwent two life-saving operations including surgery for a ruptured bowel.

Isabella refused to give in and fought for six months in order to go home.

She has recovered well and has been enjoying life at home for just over a year, now weighing 13lb 7oz – the size of a healthy baby.

Her mother told the Mail Online: “Realistically, she shouldn’t be here. There were so many times we could have lost her. But she never stopped fighting.”

She added: “She is crawling and starting to stand up, and has a great appetite. Her favourite is a cheese and avocado sandwich. She’s so happy, and has a smile for everyone she meets. It’s incredible how far she’s come.”

Kym and Ryan are grateful for the care and support Isabella received from the NHS and its neonatal team.

Ryan said: ”There are no words for the gratitude I have. They have saved my daughter’s life countless times and I’d be nothing without her.”

Despite the fact that increasing numbers of babies born prematurely in the UK survive, in practice abortion is in most cases up to 24 weeks.

In fact, the survival rate for extremely premature babies has doubled over the past decade, prompting new guidance allowing doctors to try to save babies born as early as 22 weeks into a pregnancy.

The previous clinical guidance, drafted in 2008, included a presumption against attempting to provide life-saving treatment to a baby born before 23 weeks.

On Sunday, two prominent pro-life politicians called for a review of the current time limits after new evidence emerged suggesting that unborn babies at just 13 weeks gestation could be suffering pain as they are being aborted.

A spokesperson for Right to Life UK Catherine Robinson said:

“Parliament should urgently revisit abortion time limits. It has been over a decade since they last debated fully.

“It’s time that our laws were brought into line with public opinion, modern science and the rest of Europe.”