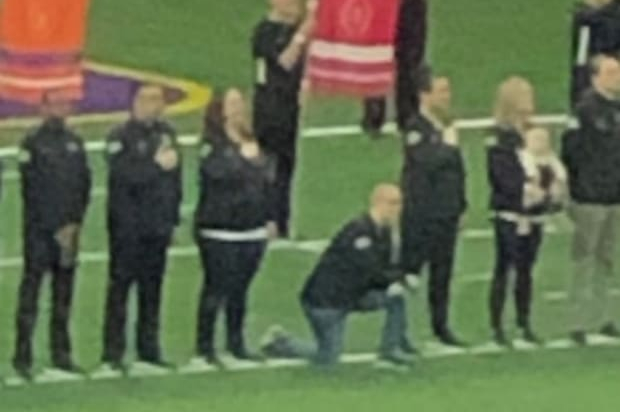 MEAWW — Minnesota’s ‘teacher of the year’ for 2018, Kelly D. Holstine was seen kneeling during the national anthem at the LSU-Clemson game as Donald Trump was in attendance.

The teacher, 46, is an instructor at the Tokata Learning Center which is an alternative high school located in Shakopee in Minnesota. The teacher had been on the sidelines in order to be recognized by the state’s educational establishment. Holstine was seen proudly announcing her protest against Trump during the championship game.

She had also taken to Twitter to share a picture showing her act of protest on Monday, January 13 along with the caption, “Honored as State Teachers of the Year at NCAA Champ FB Game. Given a platform to stand up for marginalized and oppressed people. Like many before, I respectfully kneeled during Nat’ l Anthem because ‘No one is free until we are all free’.” Holstine also added the hashtags “#imwithkap, #blacklivesmatter, and #LGBTQ.” One of the pictures that Holstine shared featured her kneeling on the field at the Mercedez-Benz Superdome in New Orleans while other ‘teachers of the year’ awardees were seen standing during the national anthem.

Join our ad-free Substack community to read and post comments...
- Advertisement -
Previous article
No, God Did Not Speak to You Through, Dreams, Visions, Voices in Your Head, or Divine Impressions
Next article
French Comedian Blasted for Song Calling Jesus a Gay Slur, Apologizes to Gays For Using “Crude Expression”