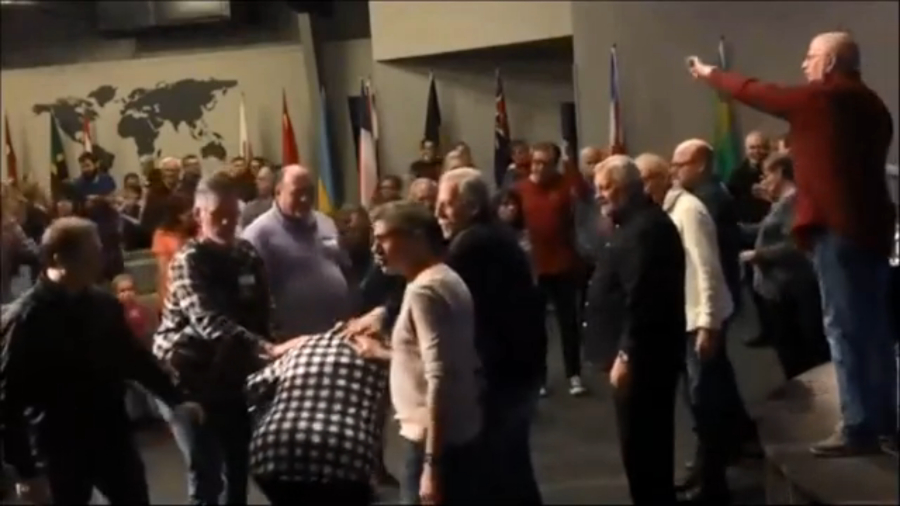 Do you ever wonder why Michael Brown evades criticizing those “fringe” charismatics like Bill Johnson of Bethel Church? Well, the reason is that, in Michael Brown’s view, they are not the fringe, but the norm. In fact, the idolatry and blasphemy that drips from the seams of the charismatic movement can be summed up as nothing less than outright apostasy. They claim the name of Christ, yet they practice something completely foreign to Biblical Christianity.

If you’re familiar with the cult of Bethel Redding, you’re aware they practice such things as grave sucking (or grave soaking) whereby people lay on the graves of dead people to “soak” the anointing from them. They also put glitter in the air vents and, somehow, the people of the congregation are duped into believing that it’s a manifestation of the Holy Spirit floating around inside the sanctuary. It’s really weird stuff that you can read about at this link.

But another strange practice of these cultish movements are something they call “fire tunnels.” It’s an outlandishly demonic sight to watch. Below, you can see this going on at Bethel.

What actually goes on, nobody knows. It appears that they go into some kind of trance and begin to hyperventilate and have convulsions. Some begin to speak gibberish. Others fall over and yet others begin to shout and scream. The entire thing is an emotional manipulation whereby people begin to feed off of each other and get a sort of “high” from this.

Yet, many Christians have continued to view Michael Brown as the “voice of reason” in the charismatic movement as Brown often claims that he does not hold the same views as those “far out” charismatics. Yet, when pressed, he will never criticize those who practice these wicked things. Why? Because he does them himself. In the video below, you can see Brown and his Fire Church in North Carolina doing the exact same thing with the “fire tunnel” that the cult of Bethel Redding does. Why Christians continue to defend Brown is baffling. The Scriptures are clear — idolaters, such were some of you, will not inherit the Kingdom of God (1 Corinthians 6:9-11).