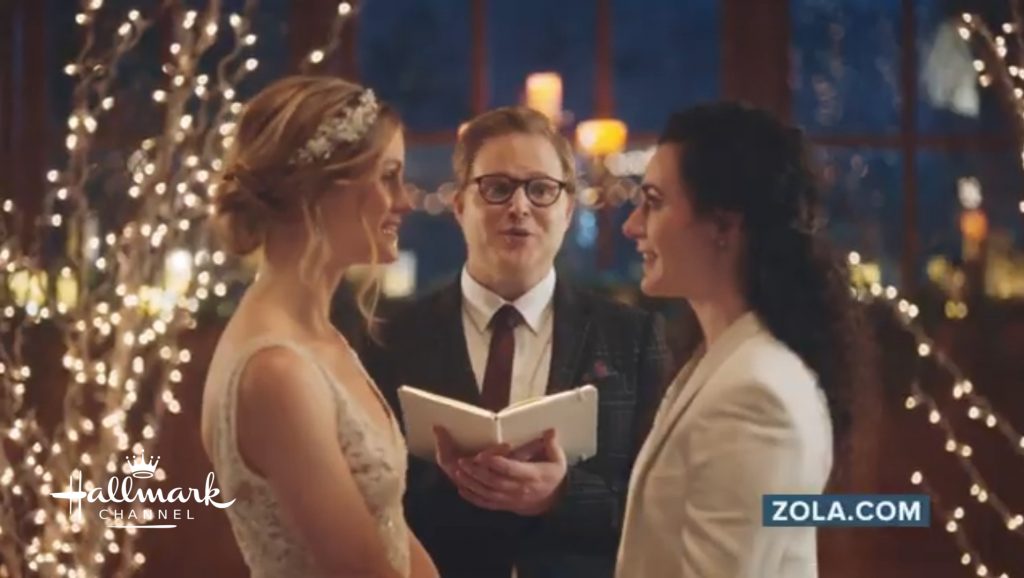 Last week, Reformation Charlotte reported that Hallmark — the famous Christmas romance movie channel — was “open” to producing and running LGBTQ movies. Bill Abbott, the CEO of Crown Media, Hallmark’s parent company, made the comments during an interview with Hollywood Reporter.

That news that Hallmark, traditionally a family-friendly television channel would cave to the demands of an LGBTQ mafia hell-bent on destroying the foundation of our society which is built upon the nuclear family was disheartening. Yet, it’s already begun according to several reports that the channel has already become dangerous to watch in front of children as it airs lesbian wedding commercials.

The commercial being reported is a lesbian wedding commercial by Zolo. Caution, do not watch in front of young children unless you’re prepared to explain to them the disgusting nature of the perversion being sold in the ad.

Several of Hallmark’s viewers were upset and reached out to a pro-family advocacy group, One Million Moms, with their complaints. One viewer complained,

Why would you show a lesbian wedding commercial on the Hallmark Channel? Hallmark movies are family friendly, and you ruined it with the commercial.

While another viewer said,

Our family was watching a wonderful Hallmark movie based on a true story. It was late, but our daughter was up late with us. During the commercial break, there was a commercial from Zola with two women lip locking! Please Hallmark … we are fed up with having the gay agenda crammed down our throats! You are one of the few channels we thought we would not have to deal with this issue! Please remove this and any other gay, lesbian, bisexual, or anything else it is called from your channels. … We love you but won’t keep watching with this type of ads.

Nearly every conservative or traditional organization that has caved to the LGBTQ push in recent history has suffered from doing so. Actual conservatives have no desire to be propagandized with gay and lesbian commercials and will likely not sit through it — and let’s be real, gay and lesbian progressives have no desire to sit through the traditional family-friendly environment that Hallmark once served up. So the constituency for this kind of garbage is small and it’s a lose-lose for Hallmark for caving.