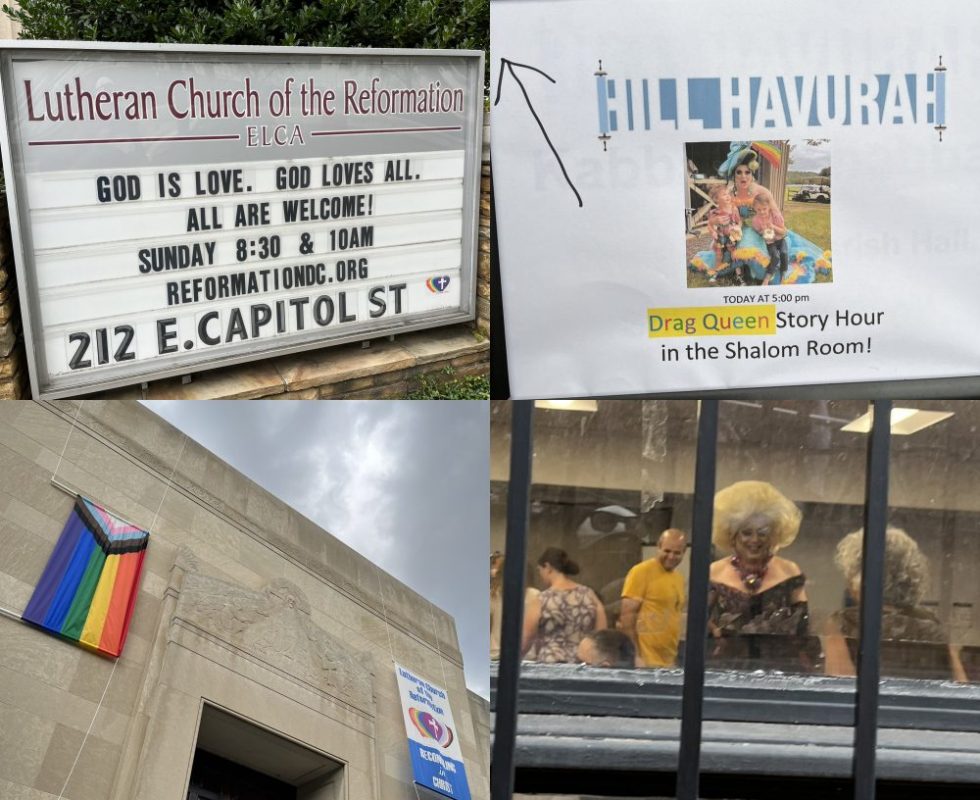 Drag Queen Story Hour has been a perversion plaguing public libraries and schools around the nation for several years but what about Drag Queen prayer time for children during Sunday morning worship at church?

In a recent spate of pulpit perversion, churches have been inviting drag queens to come in to address the children as parents willingly hand their kids over to these perverts. In December, a church in Logan Square hosted a drag queen to have a “prayer time” with children while earlier this month, another church hosted a drag queen to hold a dance party in lieu of biblical exegesis from a qualified pastor. And a Canadian “church” recently hosted an online event with a drag queen posing as God answering prayers.

It’s safe to say that God is judging these false churches and giving them over their depraved minds (Romans 1). Now, the iconic and historic Lutheran Church of the Reformation in Washington D.C. hosted a drag queen story hour for children this past Sunday.

According to the church’s website, “Lutheran Church of the Reformation was formed as a congregation in 1869 in the Capitol Hill neighborhood just after the Civil War. During and immediately after the war, many people fled or moved to the District of Columbia to care for themselves and their families, to find work, and often to contribute to the building of the nation and the world.”

The church is now a part of the apostate Evangelical Lutheran Church in America (ELCA).

According to a source on social media, the children were seen gathered around in a circle around a drag queen who was presenting to them.

And below is a video captured by an onlooker of the drag queen interacting with a very young child outside of the church on Sunday.

It isn’t surprising that so many apostate churches are propagating this stuff. But it is very disturbing that so many parents are willingly handing their children over to be indoctrinated by this ideology.

Join our ad-free Substack community to read and post comments...
- Advertisement -
Previous article
Episcopal Church Puts Out Resolution Condemning Crisis Pregnancy Centers, Apologizes for Supporting Them
Next article
Pastor Preaches That We Wouldn’t Have Abortion if the Church Ordained Women Pastors Before the 20th Century